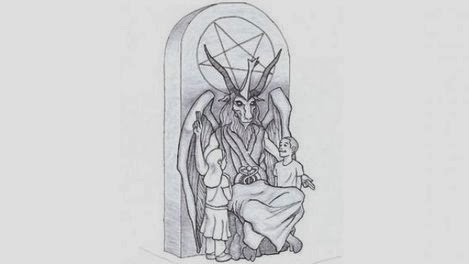 Hail "Baphomet the Sabbatic Goat, an occult symbol since the 19th century,
adopted by Crowleyans and then LaVeyan Satanists in the 20th [century]..."

The next time someone tells me atheism is not about being anti-religion, or more narrowly just anti-Christian, I think I'll just point to this list of "15 ways atheists can stand up for rationality."  It has nothing to do with rationality, and everything to do with arranging a set of straw men and then knocking them over like dominoes (I know, mixed metaphors and/or logical fallacies, but you get the idea).

There isn't one item on the list that addresses Islam, Judiasm, Hinduism, or any of the major world religions directly; and most address only fundamentalist Protestant American Christians.  But every item is anti-religion, because apparently being anti-religion=being rational.  And every item is about as fundamental to Christianity as that statue of Satan above.

The Satanists in Oklahoma are more fun.