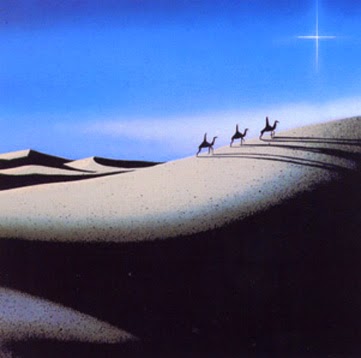 Of course, no similar studies are ever cited to show that reasoning, say working in higher mathematics or considering a scientific principle, is also simply a function of the brain, so it is no more a mirror of nature or reality than prayer is proof of the existence (or even presence) of God.  But that is beside the point:  the point is, this is new, this is revolutionary, this has never been done before, and it proves something that could not otherwise have ever been shown about religion.  It stands outside religion and reveals truths that could not otherwise have been revealed.

Matthew calls them astrologers, actually.  The word he uses is μάγοι, which Bauer tells me refers to a "wise man and priest, who was expert in astrology, interpretation of dreams and various other secret arts."  They read the stars, took lessons from them, discerned meanings, and from their knowledge, learned the truth of the significance of the birth of Jesus in Bethlehem.  Does this mean it happened that way?  No.  The story clearly serves Matthew's purposes, as it can't be reconciled with Luke's nativity in any way, and besides involves a miracle (the star "led them forward until it came to a standstill above where the child lay") which we can in no way verify from the historical record.

Is it true the Magi read the stars and found the Christchild through a miracle?  Is it true prayer is only brain activity and nothing more, just like reasoning?  Is it possible that reasoning is more than simply firing neurons?  Is is possible prayer is more than simply active portions of certain cells?  Is it possible to know truths from knowledge that is not itself religious, or from a field of human knowledge other than a specific religion and religious tradition?

Which is a revelation in itself.