At least when Rip Van Winkle woke up, things had improved..... 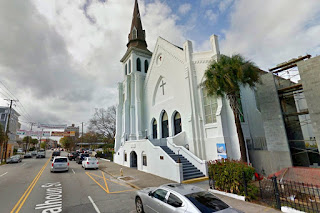 As if to prove my point:

“Back then and before, the institutions of government — police, courts, organized segregation — often worked to protect perpetrators of racially motivated violence, rather than their victims,” the editors continued. But the notion that such manifestations of systemic racism are over is patently ridiculous — even more so when you consider that this shooting happened just a few miles from where Walter Scott was gunned down by a North Charleston police officer earlier this year.

“The universal condemnation of the murders at the Emanuel AME Church” demonstrates that — Walter Scott notwithstanding — “the system and philosophy of institutionalized racism identified by Dr. King [in his response to the Birmingham bombing] no longer exists.”

And the Confederate Battle Flag which flies in Charleston and cannot even be lowered without a vote of the South Carolina Legislature, proves what about institutional racism?

Oh, you weren't through yet?

"What causes young men such as Dylann Roof to erupt in homicidal rage, whatever their motivation, is a problem that defies explanation beyond the reality that evil still stalks humanity," the editorial stated. "It is no small solace that in committing such an act today, he stands alone."

It's about evil, not institutions. It's not about race, because it's never about race; especially when white people are the perpetrators rather than the victims.  They cannot be representative or corporate; they can only be individuals.

It's not about race, because it's never about race.  It's about evil.  And there's nothing you can ever dow with that, except identify it.  Identify it, mark it as individual and aberrant, and expunge it from the body.  Muslims are not evil; they are terrorists.  Blacks are not evil, they are thugs.

Whites, individually, can be evil; but you can't blame other whites for that. You can't get that stuff on the rest of us.  The evil doer stands alone.  It's no small solace, so it makes the rest of us whites feel pretty good about ourselves.   After all, random individuals aren't like us; they're evil.

And that's what really matters.