Going on into the night.... 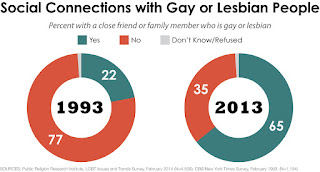 Here's the problem with what the Texas Attorney General has announced:

Sec. 2.001. MARRIAGE LICENSE. (a) A man and a woman desiring to enter into a ceremonial marriage must obtain a marriage license from the county clerk of any county of this state.
(b) A license may not be issued for the marriage of persons of the same sex.


But, of course, Paxton recognizes that.  It's the basis of his opinion that county clerks and justices of the peace cannot be forced to carry out their governmental duties under the Court ruling handed down on Friday, because (as the 5th Circuit held in the Texas law closing abortion clinics), residents of one county can just drive to another county; or another J.P., as the case may be.

So what he's actually said is, it's not a substantial burden on someone living in East Texas if they have to drive down to Houston or over to Austin or even Dallas to get a marriage license issued; or to find  J.P. who'll conduct the service.  And if you live in Erath County, or Presidio in the Trans-Pecos region, you can drive to El Paso or Amarillo or. well, Austin or Dallas.

Because that's what religious freedom is all about; the freedom to tell you to stuff it if you aren't a member of a legally protected class.  You can't do that to blacks and Muslims and Jews because of the  Civil Rights Act.  But gays and lesbians are not a protected class under federal law, nor under Texas law, so discriminate against them freely, even if you are a government official.

And yes, he knows that, too:

The only statutory restriction on their authority is that they are "prohibited from discriminating on the basis of race, religion, or national origin against an applicant who is otherwise competent to be married." Id.§ 2.205(a) (West 2006).

We'll continue to protect your right to be a bigot in Texas, especially if you work for the state.

Told ya this was gonna get ugly.

Interestingly, the only case law the AG can summon for his opinion is Federal trial court opinions (none from Texas) and one opinion from a state court in Vermont (take that, Bernie Sanders!).  Which means, legally, he's really got nothin' except the backing of the neanderthals in Texas politics, and a real hatred of gay and lesbian couples.  I wish I were more surprised, so I could be more disgusted.  We are strangling our school districts and just waiting for the next decision on school finance by the Texas Supreme Court (which has ruled on the misbegotten mess that is school financing in Texas before), and when that decision comes the State will once again find ways to not fund Texas schools in a manner befitting the 21st century in any country not named "Somalia."

But Ken Paxton assures the county clerks of Texas that lawyers will be provided for those counties that get sued because they followed this AG's opinion which is tissue thin on legal grounds and endorses with no basis in law or sense pointless bigotry against other persons.

What harm is done to a county clerk issuing marriage licenses to strangers neither the clerk nor any of the offices's employees is likely to see ever again, is not explained.  But it must be fierce to provoke such a baseless and futile argument for bigotry disguised as a legal opinion.  Then again, isn't that what Justices Alito and Roberts feared?