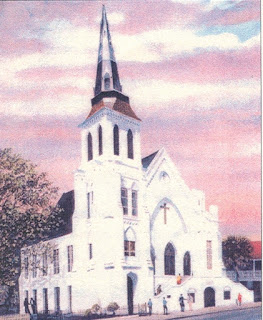 I wish I knew more history on this subject, but the next time I read some crank on the internet insisting we keep "religion" our of their politics (by which they invariably mean any political idea with which they disagree), I'm going to keep this in mind:


In the wake of the suppressed rebellion, Charleston lawyer Edwin Holland specifically blamed black churches. These preachers, he accused, carried “the Sacred Volume of God in one hand” while spreading ideas “of discord and destruction, and secretly disperse among our Negro Population, the seeds of discontent and sedition” with the other. The city decided the [Emanuel] African Methodist Episcopal Church [in Charleston, South Carolina], which attracted nearly 2,000 congregants, was the problem. New draconian measures were instituted that banned religious services without a white person present. The AME Church, only built four years previously, was then burned to the ground even as the conspirators were hung from the sky.

Seven years later, the state constructed an arsenal just around the corner to house arms and ammunition. They wanted to be prepared the next time their black population conspired an insurrection. Soon, in an agreement with the War Department, this location transformed into the South Carolina Military Academy–also known as the Citadel. The crown jewel of southern militarism, then, was in part birthed as a way to protect whites from the type of racial threats the AME Church posed.

Besides, it's not about race, because it's never about race.