Let us now praise the wisdom of youth 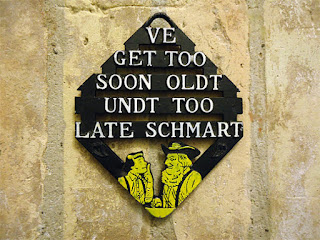 Just for the memory that picture brings, I should dedicate this post to my maternal grandmother

I heard about this study (that the questioner can influence the response on gay rights issues) on "This American Life."  Then this morning I found a link to a story at New York Magazine which, in my pre-caffeinated state, I assumed was another story about that story.  Somewhere in the tabs I had open as I waited for the coffee to boil was that story, then I closed it and thought no more of it.

Until I read this.  I won't quote the article at length, except to note the excellent opening, which deserves more attention than it will get:

Somewhere in this Chain of Fact, things can go wrong.

The very idea of a "Chain of Fact" is exactly what empiricism is based on; but, as any lawyer will tell you about a chain of evidence, links in a chain are easily broken, and not always visibly.

Which is why some of us speak of "fundamentalist atheists," although on-line atheists hate that term the way vampires hate garlic.  But even Hume recognized that "facts" are just a chain of assumptions which are only valid until the assumptions change:  such as when Planck dropped his opposition to atoms as necessary components of the cosmos.

But for me the choicest part was this, which corresponds exactly to any institution, from the church (parish, judicatory, what have you) to academia to the government:

The moment your name is associated with the questioning of someone else’s work, you could be in trouble. If the target is someone above you, like Green, you’re seen as envious, as shamelessly trying to take down a big name. If the target is someone at your level, you’re throwing elbows in an unseemly manner. In either case, you may end up having one of your papers reviewed by the target of your inquiries (or one of their friends) at some point…Moreover, the very few plum jobs and big grants don’t go to people who investigate other researchers’ work—they go to those who stake out their own research areas.

Which might well be why Max Planck said scientific truth changes when the old guard dies off and the young, who have grown up with it, accept it.  But really, that applies to almost any deep social change, doesn't it?  All our "advances" are based on that fact that NOW we know better; and pity those poor, benighted fools who didn't understand as we do.

Of course, at some point, we are the poor benighted fools, and the younger generation is just foolish to take so quickly to new, untested and unproven, and probably untenable, ideas.  Who is right is pretty much, as ever, a matter of who's in charge.
Posted by Rmj at 2:20 PM