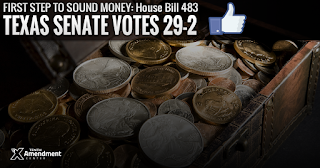 Because next Texas issues it's own scrip...or something.

After reading about the "bullion depository" now law in Texas (courtesy of NTodd), I went looking for more information on it.

Google "Texas bullion" and you get a lot of websites dealing in precious metals and sales of same.  Quelle surprise.

What the hard news articles don't mention (because they are very short) is this:

....Texas has no gold bars in the Federal Reserve’s New York vault. And what the state has is not worth a billion dollars. Instead some 4,200 gold bars bought in 2011 by the University of Texas’s endowment fund (the second largest in the country after Harvard’s) are stored in the basement vault of HSBC’s headquarters at 450 5th Avenue in New York City, just south of the New York Public Library. For the last four years, the endowment has paid an estimated $1 million per year to store their gold there. (If it had been at the New York Fed the cost would have totaled about $15,400 over that period). And the new depository law does not require the university’s endowment fund to relocate the gold to Texas.

Because, frankly, the Lege dare not mess with UT's endowment.

This small but important fact (that the State of Texas actually doesn't own any gold bullion)  is probably why most of the "news" on the internet about this is from sites selling precious metals as a "hedge" against....well, armageddon.

Because when world economies collapse and we're no longer going to the theaters to see "Mad Max" because we're living it, guns (which need precisely machined bullets) and precious metals (which you can't eat, or even throw) are gonna get you through.

However:  "The law allows state agencies, but also citizens, businesses, nonprofits and banks, to use the depository to hold gold and other precious metals."  So that's okay.  Soon as we build the damned thing, we can get UT to move its less than $500 million in bullion back to Texas from New Yawk Citee.  And other gold bugs can deposit their Kruggerands or what have you, because:  freedumb.

I wonder how much the state is gonna let private investors charge to store the gold in order to recoup the cost of building this depository in the first place.  Or is it gonna wind up like the toll road nobody wanted that not only didn't take any traffic off I-35 between San Antonio and Dallas, but went into default?

Yeah, this one has "genius" written all over it.