Oh, HELL No!, or, Don't Try This At Home, Kids. Leave it to the Professionals 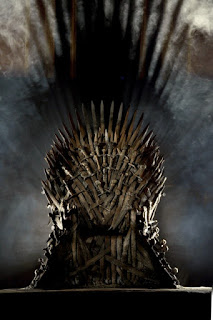 To begin with, this has nothing to do with the 'fundamental order of the universe'

I can't comment at Slate (don't ask, it's a technical thing, and NO, I don't want to solve it), and if I could (see?), I'd just bore everybody there.  And I was going to leave this alone, until I saw this Marcotte post was one of the "Most Shared."

Not that my response will be.


So let me start by saying I've never watched anything but scenes from Game of Thrones, and read only about one chapter of one book that my daughter had (and it bored me silly).  But GoT is a "classical tragedy"?

I teach Aristotle's theory of tragedy (the "classical theory," if you will) every semester.  I've also taught both "Othello" and "Hamlet" on more than one occasion.  And frankly, what Amanda Marcotte knows about either play, or Aristotle and tragedy, would get her a "D" in my class.

Ned Stark’s story is lifted right out of the pages of Othello: A great man is brought into a culture that feels foreign to him, so that he can take a leadership role within it. A manipulative villain, with Littlefinger taking the place of Iago, ingratiates himself to our hero, pretending to be his friend while actually undermining him. The villain is jealous of the hero’s nobility, and decides to twist the hero’s fundamental decency—and the naiveté that comes with being trusting—into a weapon with which to destroy him.

Oberyn Martell’s story is informed by Hamlet as well. If Oberyn had acted with haste instead of trying to squeeze a confession out of Gregor Clegane, he could have saved the day. It’s exactly what drives the arc of classic tragedy—the sense that there was some decision the hero could have made to avert disaster, but for reasons of fate or personality, he was incapable of doing the very thing he needed to do to save himself.

“Tragedy, then, is an imitation of an action that is serious, complete, and of a certain magnitude; in language embellished with each kind of artistic ornament, the several kinds being found in separate parts of the play; in the form of action, not of narrative; with incidents arousing pity and fear, wherewith to accomplish its katharsis of such emotions. . . . Every Tragedy, therefore, must have six parts, which parts determine its quality—namely, Plot, Characters, Diction, Thought, Spectacle, Melody.”


We can set aside Diction, Thought, Spectacle, and Melody:  those are peculiarities of Greek stagecraft (despite the 18th century British critics) and besides, this is not a scholarly treatise.  Go with Plot and Character, because for a tragedy, Plot is of first importance.

Consider "Othello:"  Yes, Iago is a villain, something inconceivable to Aristotle's idea of tragedy.  Yes, Iago plots against Othello.  Yes, Othello has a "tragic flaw" (hamartia) that undoes him.  But the plot of the play is Othello's marriage to Desdemona (they love each other, it isn't a rational decision) and the Duke's need for Othello to rout the Turks from Cyprus (it's not Othello's choice to go there for his honeymoon).  Once there, Othello must be a military governor, not just a military leader; a role he is already ill suited for.  Iago's plot against Othello takes advantage of conditions:  he quickly removes trustworthy Cassio from Othello's side, takes Cassio's place, and poisons Othello's already troubled mind.  Character is important, but it is the plot that undoes Othello, that exposes his tragic flaw and pushes him to a reversal of fate and fortune, and finally (and most importantly) a recognition that he is responsible for the tragic (sorry!) outcome of the play:  his wife dead at his hands, though innocent of the crimes he accused her of; Iago's wife dead, and Roderigo, and Othello dead at his own hand.  The hamartia, as Othello puts it, was that he loved not wisely, but too well.  The tragedy is that all the people who depended on him end up wounded (Cassio) or dead (Desdemona), or severely disappointed (the Duke).  Just because Othello was easily manipulated, and Iago a villainous liar, doesn't mean GoT took a page from Shakespeare and crafted a tragedy.

Plot first, Character second.  What is the plot of GoT, except a bunch of characters vying for control over a bunch of other characters, and willing to kill anyone who gets in their way?  And which character is the tragic hero upon whom everything depends (think Oedipus, king of Thebes) whose hamartia leads to a reversal of fate and fortune for which the hero recognizes he alone is responsible? Does this sound like any storyline in GoT?  And is any story in the show or the books plot driven?  Or is it driven by the set of characters all trying to kill their opponents and rule unopposed?

That is many things, but "classical tragedy" it isn't.  And tragedy is not driven by what might have been, but by what must be.  Oedipus, the most "classic" of all tragedies (per Aristotle) has no choice in his actions: there is nothing he can do to avoid killing his father and fathering children with his mother.  In fact, he's done all that before the play begins; all that's left is for him to find out how doomed he is.  And yet his hubris makes his fall worse (and leaves him blinded, his wife/mother dead by her own hand, and his four children orphans who later fight over the rule of the kingdom).  Hamlet cannot make a correct choice:  if he kills his uncle on the orders of his father's ghost, the kingdom will consider him a regicide.  If he doesn't, he's failed his duty to his father to avenge his father's murder.  He tries to expose the king, to make clear at least to himself that the ghost is not a demon or a delusion, and in the end he does kill the king, but inadvertently rather than directly.  Like Oedipus, he's caught in a situation he can't fix, no matter what choice he makes.  There is no "if" for Hamlet, no action which will "save the day" and keep Ophelia alive so they can live happily ever after.  Othello can't escape either; once he turns against Cassio (thanks to Iago's manipulations), he has no one left to trust except Iago.  And trusting Iago he is doomed; all we can do in the audience is watch as Othello is betrayed and destroyed by the choices he had no choice but to make.

Tragedy...is rooted in the fundamental order of the universe; it creates a cause-and-effect chain that clearly reveals what may happen at any time or place because that is the way the world operates. Tragedy therefore arouses not only pity but also fear, because the audience can envision themselves within this cause-and-effect chain.


There may be a way the world of GoT operates; but it's a world with magic, dragons, "White Walkers," and winters that last years and years, perhaps decades.  GoT is not "rooted in the fundamental order of the universe" (which means the Greek tragic vision of order arising from the Logos imposing order on Chaos; but Chaos eventually wins, as evidenced by the tragic outcomes of the best laid plans of men and kingdoms), it is rooted in a very specific fantasy.  The cause and effect chain it posits includes dragons as a deus ex machina, and winter as the return of chaos.  Possible in a tragedy (Medea escapes in a deus ex machina, after all), but those are really more features of fantasy.

The world of Game of Thrones, on the other hand, is chaos  That is its raison d'être and the reason everyone keeps watching; well, that and the fact you're almost guaranteed a sex scene featuring a topless woman.  It's premium cable, after all; that's what you're paying for.

And that's a whole different meaning of the term "tragedy."
Posted by Rmj at 6:13 AM