Let us now consider what is out of bounds 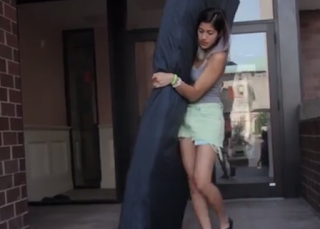 It's a mattress!  It's a protest!  It's a "rape performance piece"!

I've been struggling to formulate this issue, and I think I finally have.

What is the worst thing that ever happened to you?  And was it traumatic? Or were you told it was traumatic?  Do you even know what "trauma" is, or do you just think it's something very bad you can never forget?

I don't ask to be noisy and prying, I ask because we have social definitions of what is personally insupportable.  In the Victorian era it seems to have been sex (that's the popular opinion) and anything that brought disrepute to a woman.  Forget the Meryl Streep character of "The French Lieutenant's Woman," and think of the literary heroines who faint away because their beloved has broken off the engagement, or tries to hold their hand in public, or has been seen in the company of another woman; or whatever we would find ridiculous and incredible today.  "Barbara Allen" is a famous ballad of a young woman who spurns her beloved on his deathbed, then goes home to take to her deathbed when he dies.  It's a silly notion of romantic love, but someone at some point thought it made at least narrative sense.

So what is the worst trauma you could suffer?  Rape?  Assault?  Robbery?  Bankruptcy?  Someone pulling your pants down on the playground?

I ask because trauma is such a social thing.  Rape is the current aspirant to Worst Event Ever In Life.  I think a miscarriage would be higher, myself; but to claim that is to claim some superiority for "breeders," some moral elevation for those with children which makes the childless (by choice or circumstance) feel they are being shamed, and that is not allowable.  So rape is the candidate of choice, the one horror no one must ever suffer or think they've suffered, and it must be seen to affect us all, we must all agree rape is the worst event in anyone's life, a trauma that scars them forever, that they can never let go off or be shed off or "get over."  Miscarriage?  You can have another one.  Rape?  You must never forget.

I speak of this not because rape is "not that bad," but because it is the assault par excellence, especially among those who proclaim we suffer under a "rape culture" which doesn't take women's claims of rape seriously enough (which seems to mean believe them without question).  And because there is this matter of boundaries:  of what affects me when it affects others, and how the opinions of others does, and should, affect me.

And so we come to the story of Laura Kipnis.  Josh Marshall has as good a summation as you're likely to find, complete with links to everything he refers to.  It seems Ms. Kipnis' "crime" was, as Marshall sums it up, to write "breezily about teacher-student relationships and skeptically about two high-profile harassment/assault incidents on her own campus."  But writing breezily about sex and assault and harassment are things that are not done, and for her trouble of publishing in the Chronicle of Higher Education Kripnis was subjected to a Title IX investigation and is still being investigated for possible violation of the Northwestern University faculty handbook.

As I say, JMM links to both the original offending article, and the justification for the Title IX complaint penned by a Ph.D. student at the university, which Marshall has a hard time believing is not a parody.  And JMM's article is provoking interesting responses:

Certainly Kipnis’s initial Chronicle essay shows that she has an incomplete understanding of current laws surrounding sexual harassment and sexual assault. In a roundabout way, her Chronicle essay shows why Northwestern should have looked into her case. Not because her actions represented a clear violation of Title IX (the dismissal of the case suggests that they didn’t), but because professors like her—and she’s not alone in her views on sexual harassment and assault—maybe shouldn’t be trusted to make sure their universities follow the law.

By this reasoning any law professor who writes a law review article about sexual harassment should be subjected to a Title IX investigation to be sure his/her opinions are suited to following the law as...well, as who determines?  A college professor with no legal training?  Isn't that why we have a legal system staffed by experts in the law?  Pretty much the same reason we staff our universities with experts in the fields they teach?  This college professor provides an excellent review of the rationale behind sexual harassment law; but then turns it into a cudgel with which to enforce "correct thinking" on other professors.  Because there is this matter of boundaries:  of what affects me when it affects others, and how the opinions of others does, and should, affect me.

Or him (the other college professor), in this case.

Your opinions and my opinions may differ; but at what point, and on what subjects, does the expression of your opinions merit a government investigation?  When I'm afraid what you say may traumatize me?  Or others?  Is that what "trauma" means, now?