Standing in the wrong place at the wrong time.... 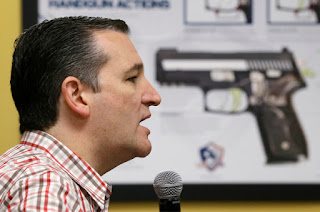 Because I can't draw political cartoons and it's not Photoshopped....

You can throw Ted Cruz into the mix, but here's a brief roundup of the public policy conversations going on over the weekend, conducted in the agora of the permanent Presidential political campaign. (Side note:  I've been catching up on "The West Wing" on Netflix; curiously I had no interest in it when it was broadcast, mostly because I don't like starting a TV series I have to watch once a week at a certain time for only a few weeks a year.  Anyway, in one season, just as Martin Sheen is re-elected President, the staff learns the V.P. is already lining up hard support for his campaign, four years later.  Watching this show and paying attention to what happens on the news now, I see how Pollyannaish Aaron Sorkin's show was, but now much he was trying to make us pay attention.  His version of something of a parable for the rest of us, but, of course, we don't really like parables.  Getting back to my thesis now....)

Rick Perry explained that the shooting in Charleston was an "accident" (he later had his staff explain he meant "incident."  As Charlie Pierce used to say:  "This close to English....").  But Perry also blamed the shooting on prescription drugs, which nobody tried to explain away.

Jeb! (and is anybody going to notice that's an acronym, not a name?) wants to recall he stood up for Terri Schiavo.

And if you don't remember that particular circus:

At the time Jeb (!) stepped in, the people in Ms. Schiavo's hospice were already under constant siege. A nearby elementary school had been vacated for almost a month due to bomb scares. An $10,000 bounty had been placed on the head of Michael Schiavo, and one guy already had been busted by the FBI for allegedly trying to collect it. Judges had been terrorized. Jeb (!) didn't care about any of this. (This is not to mention the fact that almost the entire country was begging people like Jeb -!- to butt out.) His dim sibling was president and he was governor of Florida and they believed there was political hay to be made out of keeping a brain-dead woman alive, and that was all that ever mattered.

It was particularly grotesque.

Lindsey Graham, Jeb!, and Rick Santorum, are all sticking to their line that the shootings in Charleston were about Christians, not about black people.

And Chuck Todd on Sunday, Father's Day, the Sunday after a brutal massacre of black Americans by a young white supremacist who stopped to reload four times, because one bullet for each victim was not enough(?), ran a video clip about black convicts and firearms in black America.  But it's okay, he asked us to watch it and remain "colorblind".  Don't assume he was trying to channel Stephen Colbert's "Stephen Colbert," because Todd's not that good. (Charlie Pierce has a better response to that "accident,"....er, incident; but the first link gives you a bit more of the story.)

There are, of course, calls for yet another "national discussion" of the topic of race in America.  And yes, it is long past time for such a discussion.  But we'll have to muzzle little Howie Kurtz, for his own safety:

“After a psychopath opened fire at a black church in Charleston, some people could not resist the urge to score political points,” Kurtz wrote, apparently oblivious to the fact that that’s exactly what he’s doing. “This is becoming a disgusting spectacle after these increasingly common mass shootings. And it is reprehensible.”


Little Howie's umbrage was over someone using the words "Dylann Roof" and "FoxNews" in the same sentence.

It's not the shootings that are the problem; it's the politics.  Let's cue up that discussion, shall we?  Chuck Todd and Howie Kurtz will moderate because, why not?  They're famous white men on TeeVee, right?  What could go wrong?

That whole withdrawal from society thing is looking better and better....
Posted by Rmj at 11:50 AM