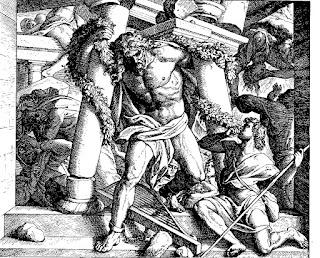 
But the really interesting part is the idea of the paradox at the heart of fundamentalism:

It’s important to understand, as I argue in the book, that fundamentalism is a paradox. Fundamentalists describe themselves as both marginalized and a majority. They speak of national revival and theocratic dominion, but both are always deferred. They celebrate local victories while announcing imminent national destruction. This paradox is rhetorical—meaning that it’s constructed in and through language. I’m a student of rhetoric and, in this book, I’m not particularly interested in whether fundamentalists “really” represent localism or really speak as an oppressed minority. What’s important is that they say they do, and this paradoxical claim drives and justifies political action.
In the book, “superchurch” is one of the words that speaks to this paradox in fundamentalist rhetoric. There was a big push for Protestant unity in the immediate aftermath of World War I, and many of the early fundamentalist leaders denounced ecumenical organizations like the Federal Council of Churches and the Interchurch World Movement as elements in a “super church confederacy” that would eliminate denominational distinctions and eventually destroy “Bible-believing” churches altogether.

There was a kernel of truth in these arguments; some ecumenical leaders were pushing, for example, to consolidate under-staffed rural churches by merging congregations from different denominations. But this kernel of truth became part of a much larger narrative in which national religious and political leaders were joining together to crush local churches and outlaw fundamentalist belief. This narrative, in turn, has continued in different guises over the past century—linked with apocalyptic fears of communism, secularism, environmentalism, socialism, and so forth.

The flip-side of this narrative, however, was that of churches that resisted. Magazines published anecdotes about local pastors who stood up to ecumenicists and local churches that broke away from their corrupted denominations. Fundamentalist publications began celebrating large, independent churches as islands of local resistance. By the 1960s, pastors like Jerry Falwell had begun arguing that local, “superaggressive” churches could “capture” their communities for Christ, reform local politics to reflect fundamentalist authority, and become media centers for global evangelism. These fundamentalist “superchurches” would eventually provide the foundation for national political organizations like the Moral Majority in the late 1970s.

Of course, even as fundamentalists have become more nationally visible and politically active, the paradox remains. Just a couple of months ago, for example, when Senator Ted Cruz announced his candidacy for president at Falwell’s Liberty University, he encouraged Christian conservative voters to think of themselves as both an oppressed minority and an untapped majority. He described the federal government as a monolithic and mischievous force that crushes the dreams of small business owners, the relationships between individuals and doctors, the rights of parents, and the freedom of religious believers. At the same time, he spoke of “millions of courageous conservatives” and “born again Christians” whose votes could restore an idealized constitutionalism and drive the big-government bureaucrats out of the American temple.


That is a history I did not know; and apologies for the long quote (something I always tell my students never to do!), but I'm less interested in the ecclesiology there than the paradox of the soteriology, perfectly captured in this story:

A pastor in Kings Mountain, North Carolina is coming under fire for telling a group of graduating seniors at a public high school that, if they belong to the LGBT community, they are going to hell, WBTV’s Sarah-Blake Morgan reports.

The interim pastor of Temple Baptist Church, Scott Carpenter, spoke before a group of students at King Mountain High School’s annual baccalaureate service. The service was optional, but most students chose to attend.

Carpenter told WBTV that he doesn’t believe he did anything wrong. “Nobody got bashed or anything,” he said, “all I did was simply speak biblical truth.”

He insists that his comments were motivated by love, not homophobia. “Do I hate anybody?” he asked rhetorically. “Absolutely not. I just love them too much not to tell them the truth.”

A paradoxical sense of love, to use it to judge people.  I don't remember that model in the gospels; but maybe my memory isn't so good.  Still, a representative example of yet another paradox of fundamentalist thinking.  If you are going to insist on the "right to authoritatively define the fundamentals of truth and public morality, based on an authoritative interpretation of an authoritative Bible," you're going to sound like a judgmental ass.

Unless, of course, you do it in love.

I went looking for something to close this with; I found something better.  First, Julian of Norwich, from chapters 27, 29, and 33 of the Shewings:

But I did not see sin; for I believe it has no sort of substance nor portion of being, nor could it be recognized were it not for the suffering which it causes. And this suffering seems to me to be something transient, for it purges us and makes us know ourselves and pray for mercy; for the Passion of our Lord supports us against all this, and this is his blessed will. And because of the tender love which our good Lord feels for all who shall be saved, he supports us willingly and sweetly, meaning this: 'It is true that sin is the cause of all this suffering, but all shall be well, and all shall be well, and all manner of thing shall be well.' These words were said very tenderly, with no suggestion that I or anyone who will be saved was being blamed. It would therefore be very strange to blame or wonder at God because of my sin, since he does not blame me for sinning.

And I wondered greatly as this revelation, and considered our faith, wondering as follows: our faith is grounded in God's word, and it is part of our faith that we should believe that God's word will be kept in all things; and one point of our faith is that many shall be damned--like the angels who fell out of heaven from pride, who are now fiends, and men on earth who die outside the faith of Holy Church, that is, those who are heathens, and also any man who has received Christianity and lives an unChristian life and so dies excluded from the love of God. Holy Church teacmes me to belive that all these shall be condemned everlastingly to hell. And given all this, I thought it impossible that all manner of things should be well, as our Lord revealed at this time. And I recived no other answer in showing from our Lord God but this: 'What is impossible to you is not impossible to me. I shall keep my word in all thing and I shall make all things well.'

...the more anxious we are to discover [God's] secret knowledge about this or anything else, the further we shall be from knowing it....


And then Merton, on a  different subject altogether, but still applicable here, as well:

We are living under a tyranny of untruth which confirms itself in power and establishes a more and more total control over men in proportion as they convince themselves they are resisting error.

Our submission to plausible and useful lies involves us in greater and more obvious contradictions, and to hide these from ourselves we need greater and ever less plausible lies. The basic falsehood is the He that we are totally dedicated to truth, and that we can remain dedicated to truth in a manner that is at the same time honest and exclusive: that we have the monopoly of all truth, just as our adversary of the moment has the monopoly of all error.

We then convince ourselves that we cannot preserve our purity of vision and our inner sincerity if we enter into dialogue with the enemy, for he will corrupt us with his error. We believe, finally, that truth cannot be preserved except by the destruction of the enemy-for, since we have identified him with error, to destroy him is to destroy error. The adversary, of course, has exactly the same thoughts about us and exactly the same basic policy by which he defends the "truth." He has identified us with dishonesty, insincerity, and untruth. He believes that, if we are destroyed, nothing will be left but truth.