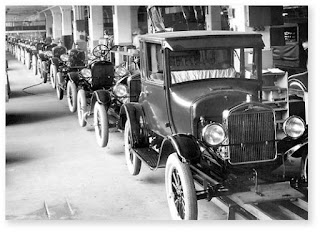 Ain't it always the way?

The new Ford car is out....Mr. Ford has given out an interview saying that the car has cost him about a hundred million dollars and that after finishing it he still has about a quarter of a billion dollars in the bank.

I have been doing a little arithmetic and have come to the conclusion that the car cost Ford workers at least fifty million in lost wages during the past year.  No one knows how many hundreds lost their homes in the period of unemployment, and how many children were taken out of school to help fill the depleted family exchequer, and how many more children live on short rations during this period.  Mr. Ford refuses to concede that he made a mistake in bring the car out so late.  He has a way of impressing the public even with his mistakes.  We are now asked to believe that the whole idea of waiting a year after the old car stopped selling before bringing out a new one was a great advertising scheme which reveals the perspicacity of this industrial genius.  But no one asks about the toll in human lives.

What a civilization this is!  Naive gentlemen with a genius for mechanics suddenly become arbiters over the lives and fortunes of hundreds of thousands.  Their moral pretensions are credulously accepted at face value.  No one bothers to ask whether an industry which can maintain a case reserve of a quarter of a billion out not make some provision for its unemployed.  It is enough that the new car is a good one.  Here is a work of art in the only realm of art which we can understand.  We will therefore refrain from making undue ethical demands upon the artist.  Artists of all the ages have been notoriously unamenable to moral discipline.  The cry of the hungry is drowned in the song, "Henry has made a lady out of Lizzy."