Enjoying the day of Jubilee 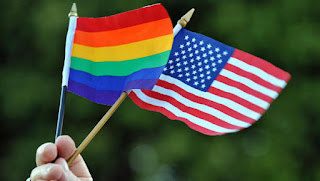 I was in the car much of the day yesterday (road trip for peaches; it's a long story) and had to listen for almost an hour before I could confirm the Supreme Court's ruling yesterday; then I spent the rest of the day hearing more and more and more about it.

The funniest part was when Texas AG Ken Paxton told county clerks across Texas (all 256 of them, or so) not to issue any marriage licenses to same-sex couples except on his directive.  On Friday morning, after the opinion was announced, county clerks across Texas reminded Paxton "You're not the boss of me."  The Travis County clerk (Austin), said both that the AG had lots of lawyers, and he had lots of lawyers, and his lawyers could read the Kennedy opinion as well as the AG's lawyers could.  He also pointed out an AG opinion is not binding on a state agency in the face of a court ruling.

By late afternoon Travis County had issued 80 licenses, and was going to take anybody still in line at 6:00 p.m.

Harris County had originally said they'd wait; but they didn't.  Neither did Dallas County or Bexar County (San Antonio).  At this point I'd guess the clerks who didn't issue licenses weren't asked to.

"To be clear — the law in the state of Texas is that marriage is one man and one woman, and the position of this office is that the United States Constitution clearly does not speak to any right to marriage other than one man and one woman and that the First Amendment clearly protects religious liberty and the right to believe in traditional marriage without facing discrimination," Paxton wrote.

But I don't think anybody in Texas is paying attention.  That reference to the First Amendment is Paxton's real point:  he wants to go Hobby Lobby on this decision, and overrule it with RFRA*:

“Our guiding principle should be to protect people who want to live, work and raise their families in accordance with their religious faith. We should ensure that people and businesses are not discriminated against by state and local governments based on a person’s religious beliefs, including discrimination against people of faith in the distribution of grants, licenses, certification or accreditation; we should prevent harassing lawsuits against people of faith, their businesses and religious organizations; we should protect non-profits and churches from state and local taxes if the federal government penalizes them by removing their 501(c)(3) status; and we should protect religious adoption and foster care organizations and the children and families they serve. Shortly, my office will be addressing questions about the religious liberties of clerks of court and justices of the peace.

“Displays of hate and intolerance against people of faith should be denounced by all people of good will and spark concern among anyone who believes in religious liberty and freedom for all.

Although that last statement puts us through the looking glass, and into the land of Rick Scarborough (no, not that one; this one is a nutcase from Nacogdoches, Texas).  I heard him on NPR yesterday, and wept for the infamy he is bringing to a small town that deserves better.

Actually what I heard was a man who desperately wants to be arrested.  When asked the perfectly reasonable question about what he would do to engage in "civil disobedience" against this ruling, he said he'd do what he'd been doing:  preach against homosexuals as sinners.  Following this ruling he now expects the full force of the law to descend upon him for such opinions, and his church (and those pastors who agree with him) to lose their tax exempt status.

They want, in other words, to be that important.

It's sadly misguided, actually; and I feel sorry for him.  His legal analysis is equal parts paranoia and ignorance.  Even the Civil Rights Act of 1964 doesn't penalize discrimination with criminal charges, unless there is an underlying crime that can be linked to the discrimination.  Sermons against homosexuals are not criminal acts, and the Supreme Court did not just make them so.  Churches that choose not to conduct same sex marriages will suffer no more penalty than churches that decline to conduct marriages of people who are not members of that church.  But oh, Rick Scarborough wishes they would.

The irony here is that, in Texas, Mr. Scarborough is quite free to discriminate against gays and lesbians.  Any business in Nacogdoches, upon learning an employee has just married her same-sex partner (and in a small town like Nacogdoches, how could you hide that?), would be entirely free to fire said employee.  Is that oppressing someone's religious beliefs?  I think it is wrong, but to say a law banning such decisions traduces one's religious principles is to turn the Hobby Lobby decision into a club.

Wait; it is already.  On this the Supremes have made their bed; let them lie down in it.

That's where the fight is going, anyway:  RFRA and Hobby Lobby, and a perversion of the 1st Amendment it is going to be, too.  The Supremes will either have to accept this expansion of that bad decision, or immediately start whittling away at it.  Either way, bad decisions make bad law, and that will keep the courts busy for decades.

Jeffrey Toobin thinks this, too, shall pass:

We should be clear about the “liberty” interest being asserted here. Abbott, Jindal, and their allies are positing a right to discriminate—for local officials to refuse to conduct same-sex weddings, for photographers and bakers to refuse to do business with gay people, for wedding planners to advertise that no gay couples need apply. Their actions are the linear descendants of the Virginia officials who claimed divine guidance for their prohibition on interracial marriage. The First Amendment allows individuals to believe anything they want, but it does not allow them to use their beliefs as a license to discriminate in ways that would otherwise be limited by law. No one, at this late date, would claim a religious inspiration for a florist to refuse to sell flowers to an interracial wedding or for a magistrate to perform one; they should not have the right to refuse to do business for a same-sex wedding, either.**

And Scarbrough clearly thinks state laws barring discrimination against sexual preference means the jackbooted thugs will be smashing down his door any day.  But the legal argument is going to be on Hobby Lobby and RFRA, and it's not going to be fun to watch, nor is it going to be so obviously cast in terms of white people screaming at little black girls surrounded by soldiers as she enters a school building.

That's the right image to evoke, but we won't get off that easily.  In the meantime we should follow the advice of the Chief Justice, and celebrate.  President Obama is right:  today our union is made just a little more perfect.  And really, the Greg Abbotts and Ken Paxtons and Rick Scarbroughs are not gonna take that away from us.

*Or, on sounder legal footing, with the 1st Amendment.  But really, the legal argument here comes from Hobby Lobby v. Burwell, and that argument is based on RFRA.

**This is part of what Toobin is referring to.  And he's right:  these objections are exactly equal to the objections to Loving v. Virginia.  I haven't been as ashamed of Texas since Kennedy was killed here.  At the very local level, it's likely to get very ugly.