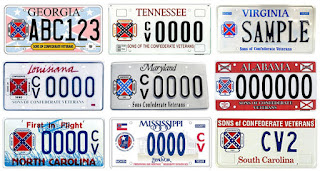 Reading about the shooting in Charleston, I realized the difference between a "lone gunman" and a "terrorist."  And yes, it has a lot to do with race.

"Terrorism" is contagious.  It was always a symptom of chaos, of the ground beneath our feet being unstable, the stability beneath our comfortable reality being unreliable.  Charlie Pierce said of the shooting in Charleston that:

There is a ferocious underground fire running through American history. It rages unseen until it flares again from the warm earth. It has raged from the death of Denmark Vesey in 1822 to the death of the Reverend and state senator Clementa Pinckney on Wednesday night.

He's right; except the shooter was a white man, so Mr. Pierce is wrong.  Violence is only terrorism when it is contagious, and it is only contagious when it involves non-whites.  All whites are "lone gun men."  All non-whites are "terrorists," if they aren't "thugs."  The latter terms are distinguishable, but the intent is much the same:  violence among brown people is contagious.  It spreads like fire in dry grass; and white people fear being burned out of their comfortable homes.  Violence by whites is just an aberration, just the act of an individual.  It's nothing to be afraid of.

So when two crackpots travel from Arizona to a Dallas suburb, they are representatives of a wider danger to white people:  "Muslim terrorists."  When a 20-something white kid walks into a Black AME church in Charleston, South Carolina, an historically black church with roots in early 19th century (pre Civil War) America, sits quietly for an hour, then calmly shoots 9 people,  reloading five times to be sure he can complete the task, and tells one survivor: "I have to do it.  You rape our women and you’re taking over our country and you have to go;" then it's the act of a lone gunman.  You'll notice in that statement that the individual must act, but the race is to blame.  Racism, of course, is reprehensible.  But a Charleston reporter no doubt thought himself reasonable when he asked a group of black men what black community leaders could do to prevent shootings like this.   Whites act individually; blacks act corporately.

And the only way to respond is to treat them as a corporate being:  one stands for the whole.  Black men outside a black church speak for a black "community," just as black members of a church are responsible for the sins of that community, as perceived by a white racist.  The white individual, however, doesn't reflect the opinions of the white community.  He is a "lone gun man."  Black men must speak for the black community.  White men are individuals.  Black men are a group entity.

When the shooter is a "lone gunman" we must aver we don't know what the motivation is, that this is an "aberration," because whites are incapable of acting corporately.   Even before the police had caught the suspect, even before the survivors had been interviewed, we knew the shooter was white.  So his acts had to be individual, and also aberrant.  White individuals can never represent whites as a whole.

Conveniently, evil is individual, too.  We can unite against the evil individual:

"I think this is one of those situations — maybe it's a good point where we don't know the motivation of the person who did it," Giuliani said on Fox News' "Fox and Friends." "So maybe this can unite us because whoever did this is just an evil person."


Terrorism is corporate.  White people are incapable of being corporately blamed.  Some individuals are evil, most are good.  Brown people, though:  Arabs, Indians, Pakistanis, African-Americans:  they are capable of being corporately evil.  If two crazed gunman can't get past a school district police officer and a city police officer, they still represent the threat that "Muslims" across the country are about to rise up and slit our throats as we sleep.  If one young white man calmly shoots 9 people in a black church, reloading to be sure he meets his quota, he's neither a terrorist nor a thug (who always travel in groups, in conspiracies, in vast numbers of evil intent and shadowy lives), he is just "evil."

And evil happens.  What're ya gonna do about it?  You can't even properly get upset.  Catch the guy, put him in jail, problem solved.

In other news, 9 states issue license plates honoring the "Sons of Confederate Veterans."  Texas, said the Supreme Court today, does not have to be the 10th.  In one small way, we stand apart from the rest of the South.

Gotta take your good news about racism in America where you can find it.