Because some good times don't come as slow, and old times are sometimes quickly forgotten 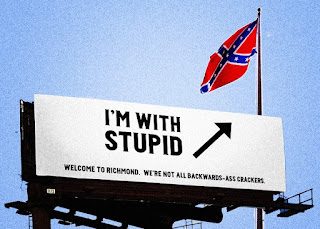 Racism is deeply, deeply entrenched in American culture.  And it isn't a matter of distinguishing between "true racists" and everybody else (the distinction lies, if anywhere, between racists and white supremacists), it's a matter of recognizing how tainted we all are by racism:  either as victims of it, or as beneficiaries.

Change, I thought, had come in the 90's, or maybe by the beginning of the new century.  My daughter grew up in a world where racism was not as institutionalized as it was in my childhood:  no segregated schools, bathrooms, water fountains, swimming pools, hotels, restaurants, etc.  (The basis for denying bakers the "right" to refuse to sell a cake to a same-sex couple for their wedding, is the same basis for laws denying hotel owners and restaurant owners the right to deny service to people based on their race.)  I was truly optimistic the worst of racism was behind us because generational racism was rapidly receding from the scene, thanks to the long, hard work of the Civil Rights movement of the '50's and '60's, and then to efforts of Baby Boomers to truly eradicate racism from American public life (rather than leave it at the "I just don't want my daughter to marry one" stage).

What's interesting is how sudden change can be.  Before my daughter was born I was just beginning to accept the idea that homosexuals should be treated as human beings.  I hadn't even come to the idea that they deserved the same legal protection as race and religion (two of the categories of the Civil Rights Act).  25 years later, even my parents accept that lesbian couples should be allowed to marry.  The opposition to such marriage is reduced to something of an absurdity.

And now the state of Virginia (bolstered, no doubt, by the recent Supreme Court ruling, because apparently they lost in the lower courts on the issue) is moving to rescind its license plates commemorating the Sons of Confederate Veterans.  South Carolina may finally relegate the Confederate battle flag to a museum, rather than a permanent display on the State Capitol grounds.  Mississippi may remove the flag from its state flag.

This is head spinningly fast.  Over the weekend GOP candidates were falling over themselves not to offend the tender sensibilities of the few rednecks and white supremacists still as wed to the battle flag as the NRA is to the 2nd Amendment.  Now they line up to praise Nikki Haley.  Already articles posted two days ago seem dated, so rapidly has support for symbols of racism melted away.  I awake to find Mitch McConnell is calling for the removal of a statue of Jefferson Davis from the Kentucky Capitol.  Maryland, Alabama, Tennessee, North Carolina, Texas, Kentucky, Virginia, Mississippi, South Carolina, Washington, D.C.:  all taking actions to remove the Confederate battle flag or statues of Confederate leaders from public display.  Retailers don't want to sell it.  Manufacturers don't want to make it.   Why do these things happen so quickly?

Josh Marshall thinks its generational, that the old is dying off and the new is not interested.  Where does that place Dylan Roof?  A marginal white man, is where.  Presumably he has no political power. But then where did the long defense of the flag in South Carolina, where the law practically makes it a holy object, come from?  That law is at best 25 years old.  Where the main proponents of it all in their 50's and 60's when it was passed?

I don't think it's age; I think it's a paradigm shift.  Not in the strictly Kuhnian sense, but in the sense that support for the old has been undermined for some time, and when it starts to go completely, it goes rapidly.  Support for gays, especially in marriage, turned suddenly from opposition to approval.  It practically flipped overnight.  The same has happened for the Confederate battle flag; even in the deepest of the old South (and South Carolina is truly the birthplace of the Confederacy), it has finally been flown too long.

Sometimes change happens like that:  what was seen as unimaginable is suddenly overthrown so rapidly everyone wonders why it didn't happen sooner, and who was ever in support of the old?  Especially when the old is so graphically connected to slaughter, to the deaths of innocents praying with their assailant before he pulled his gun; an assailant bent on producing a race war but who, instead, prompted a new war on racism.

There is something sadly human about this:  violence prompts us to heed the angels of our better nature.  But the violence comes in a context.  The context here goes back to Trayvon Martin, if only because that event may have radicalized Dylann Roof.  But the cumulative effect of so much violence against blacks:  Trayvon Martin, Eric Garner, Ferguson, Baltimore, the pool party in a Dallas suburb, finally the shooting in a black church of black people simply because they were black.  Dylann Roof wanted to start a race war.

He started another kind of revolution entirely.  Like most revolutions, it is an expression of culture, not a repudiation of it.  But that's alright; it's about time American culture expressed itself clearly on this racist symbol, one revived in the '60's in response to the burgeoning civil rights movement.  The times, they are still a-changin'.  Some changes are on the very long throw; and the longer you are alive, the more you realize the "long run" isn't really that long, after all.  Especially when it bends toward justice; at least of a sort.