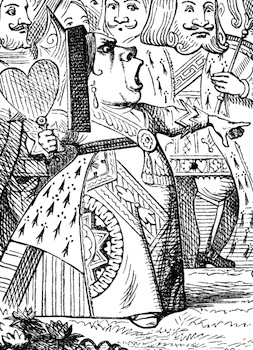 'Consider your verdict,' the King said to the jury.
'Not yet, not yet!' the Rabbit hastily interrupted. 'There's a great deal to come before that!'

Well, I think the driver of the car is a disgrace to himself, his family, and this country. And that is — you can call it terrorism. You can call it murder. You can call it whatever you want. I would just call it as “the fastest one to come up with a good verdict.” That’s what I’d call it. Because there is a question: Is it murder? Is it terrorism? And then you get into legal semantics. The driver of the car is a murderer. And what he did was a horrible, horrible, inexcusable thing.


The "legal semantics" there don't turn on the question of whether the death of Heather Heyers was a crime of murder or of terrorism; the only legal issue the President was addressing was the presumption of innocence.  Because he pronounced the driver of the car guilty.  He called for a fair trial, and then we hang him.  He became a character from a Lewis Carroll novel.

“That car in Charlottesville did not kill or wound just the 20 bodies it struck. It damaged the nation. Mr. Trump not only failed to help the country heal; he made the wound wider and deeper.”

“The president of the United States all but declared that he has their backs.”

So what does Trump do today?


Amazon is doing great damage to tax paying retailers. Towns, cities and states throughout the U.S. are being hurt - many jobs being lost!
— Donald J. Trump (@realDonaldTrump) August 16, 2017


Not sure how Amazon not paying sales taxes is hurting jobs in America, but the more salient question is:  what did Amazon do to Trump?

This is so far beyond "Nixonesque" you can't even see Nixon in the rear-view mirror anymore.