Everything new is old again 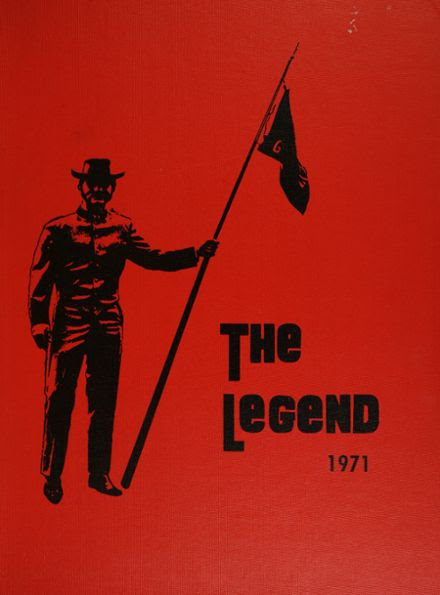 The yearbook from my first year, oddly enough....

It was 47 years ago today....well, not literally "today," but as this is now the first day of school in Texas, and I can't remember when school started 47 years ago (after Labor Day, I'm pretty sure, but anyway), it was 47 years ago I entered Robert E. Lee High School in Tyler, Texas.   The campus was 12 years old at the time, built, as many schools I attended in Tyler were, during what I can only call the "greenhouse" craze.  One wall of every classroom was plate glass.  The elementary school I attended had plate glass on two sides of the room.  We practiced "duck 'n' cover" under our desks in those classrooms, oblivious to the fact that a nuclear blast or a tornado (the latter much more likely) would turn all that glass into flying shrapnel that our little desks and our little hands on the nape of our necks, would not protect us from.

All we knew was, they weren't air-conditioned.  Air conditioning for schools wasn't imagined in 1958 (when Lee was built), and frankly, I don't think it would have worked in those greenhouse structures (which were only saved from being true greenhouses by overhanging roofs).

I mention this because things are stirring again around my high school alma mater, when I think the real problem with the school is that it still stands.  Even my elementary school was finally replaced by a more reasonable (and tornado safe) building a few years ago.  Lee's sprawling modern-in-1958 campus still stands, housing far more students than it did in my day.

And it's still named for the Confederate General who lost the Civil War.

It was a bit worse 47 years ago.  The football team (the only athletes who really mattered; this is Texas) were the "Rebels."  A huge Confederate battle flag (the one you think is the "Confederate flag") was unfurled on the football field during games by a group of boys who existed only for that task.  There was a working cannon, fired for touchdowns (there weren't many, frankly, when I was there) painted Confederate grey, and attended by students in Confederate uniforms.

And in 1970, a federal judge's order shut down the "black" school in town, and forced the integration of Lee and the other high school in town (there are still only two).  It went better at the other school than it did at Lee, partly because the black students didn't want to lose their school and its traditions (who can blame them?), and partly because "Lee rebels" wasn't just the school mascot.  It meant a lot to a lot of people I learned that year to call "rednecks."  Yeah, like the Randy Newman song; he nailed it pretty well, IMHO.

There was a "riot" in 1972 over those symbols. White people (a few) treated them as inviolable traditions; blacks treated them as insulting and offensive.  Same as it ever was.  The event wasn't really as violent as a riot, and there really wasn't even a fight, as it turned out. I  don't recall anyone who was actually hurt, but the incident occupied half the campus around lunch time (there were four half-hour lunch periods, IIRC).  The campus sprawled so much half the campus didn't know what was going on, while the other half thought the school was burning down and anarchy had come to Tyler.  I was on that half of the campus.  There was a fire:  of a huge paper banner promoting the football team for a game that weekend.  I didn't even see it, just heard about it.  There was some chaos on that end of the school, magnified by teenage hormones and adolescents' sense of drama (and the times; you had to be there.  The '70's wasn't all about Saturday Night Fever.).  After that and much complaining by white students, the Rebels became the Red Raiders, and all symbols of the confederacy, save the name of the school, went away.

I think it was the next year I was sitting in the football stadium in December watching Earl Campbell (he played for the other high school) carry half the Lee football team on his back, literally, as he powered down the field.  It was like watching a living cartoon.  We had all returned to our places by then, accepting the new order and moving on with our lives.

But Robert E. Lee was still named for...Robert E. Lee.  Now, the news tells me, 50+ people have signed a petition to change the name, 4000+ people are opposed.  My sense is these are the same people who noticed the "fight" in '72.  Parents of kids there, people who lived near the school and had sent, or expected to send, their kids there.  Not the whole town, in other words.  But some things haven't changed, like the school song:

“Robert E Lee, we raise our voices in praise of your name. May honor and glory e’er guide you to fame. Long may your colors and their symbols recall faithfully that red is for courage and white for purity.” We used to laugh about the “purity” part. I don’t recall giving a second thought to what the symbols actually represented.


That's a report from someone who graduated from Lee long after I did.  She's in no position to recall the events of '72.    She also says the numbers are 100+ in favor of changing the name, v. 7000+ against.  So it goes.  But I stopped on this because she quoted the school song (set to a Mendelssohn tune, from "Midsummer Night's Dream," if memory serves).  She says her friends laughed at "purity."  We had a crowd who ignored the lyrics, except to shout "WHITE" as loudly as possible, for reasons obvious to everyone.  I presume that long ago changed.  Something else apparently changed, too, and this is disheartening:

When I sing it, I remember leaning side to side in the bleachers, pinky fingers hooked with my friends, the innocence of youth never forcing me to question what my school’s namesake really meant. I knew that REL was the “white” school and the school on the North side of town, John Tyler, was the “black” school. I saw the kids in trucks waving confederate flags during football season and while I knew the symbol was one that could be - for lack of a better word – “triggering” to my black classmates, I never stood up and said a single word.


Confederate flags were flown from trucks in defiance during football season in 1973, a declaration that it was still "their" school and "their" symbol.  I figured that had died out but, with the school still named for the Confederate general, why am I not surprised that it didn't?  What better way, after all, to keep it alive than to keep the school's original name, a reminder that old times there are not forgotten (even though they should be).  And "White" school and "black" school?  That's what Brown v. Board was supposed to eliminate.

The more things change, the more they remain the same; unfortunately.  Kuhn says paradigm shifts only occur when the old die off and leave the young to their new ideas.  Too bad culture doesn't work that way.