When the lines start falling 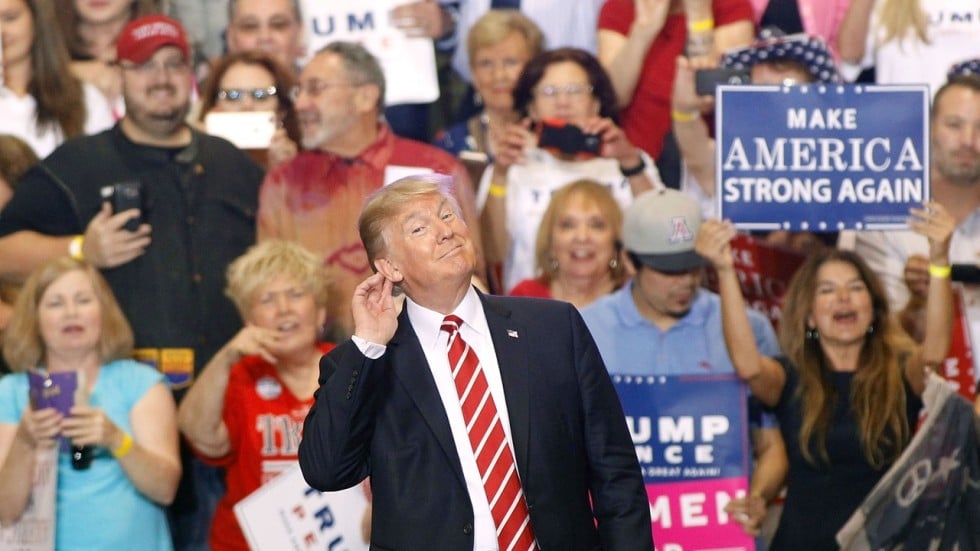 Ladies and gentlemen, the President of the United States:


You know why? Because they are very dishonest people. So I said, racism is evil. Now they only choose, you know, like a half a sentence here or there and then they just go on this long rampage, or they put on these real lightweights all around a table that nobody ever heard of, and they all say what a bad guy I am. But, I mean do you ever see anything -- and then you wonder why CNN is doing relatively poorly in the ratings. Because they're putting like seven people all negative on Trump. And they fired Jeffrey Lord, poor Jeffrey. Jeffrey Lord. I guess he was getting a little fed up, and he was probably fighting back a little bit too hard. They said, we've better get out of here; we can't have that.And those who cause violence in its name are criminals and thugs, including the KKK, neo-Nazis, white supremacists and other hate groups that are repugnant to everything we hold true as Americans. Now let me ask you, can it be any better than that, in all fairness? And you know I mention that, but to the best of my knowledge when there was a big problem, Barack Obama never said it took place because of radical Islamic terrorists, he never said that, right.


If you don't follow too closely, you could almost imagine he's talking about white supremacists and Nazi.  But then he mentions CNN and goes off on some weird tangent about Jeffrey Lord (while conveniently leaving out why Lord was fired by CNN), and by the time he calls Nazis and the KKK repugnant you've forgotten what he's talking about or even that he ever said such groups were "repugnant" because kind of like the disavowal of the birther pursuit he followed so long and so viciously, he said it so begrudgingly, sandwiched between that horrific response to the incidents in Charlottesville the first time he spoke, and the completely bonkers press conference in New York three days after that which convinced tout le monde that our President had not only lost the plot, but couldn't even read the book.  I mean, he spends so much time condemning the press and calling them evil; but I'm getting ahead of him there.


And -- and I say it, and you know, we're all pros. [Racist narcissistic asshole is a profession?  Sorry,  I had to ask.] We're all, like, we have a certain sense. We're smart people. These are truly dishonest people. And not all of them. Not all of them. You have some very good reporters. You have some very fair journalists. But for the most part, honestly, these are really, really dishonest people, and they're bad people. And I really think they don't like our country. I really believe that. And I don't believe they're going to change, and that's why I do this. If they would change, I would never say it. The only people giving a platform to these hate groups is the media itself, and the fake news…These are sick people. You know the thing I don't understand? You would think -- you would think they'd want to make our country great again, and I honestly believe they don't. I honestly believe it. If you want to discover the source of the division in our country, look no further than the fake news and the crooked media...


The only thing missing at the beginning there is "many sides; many sides."  And again, more verbiage spewed about journalists who write about Trump, than about people doing actual evil in the world:  like the ones who chanted "BLOOD AND SOIL!" on the campus of the university founded by Thomas Jefferson, or alternated that with "JEWS WILL NOT REPLACE US!"  And carried guns and baseball bats and body armor and pepper spray, and used the bats and the pepper spray liberally, until some guy finally went completely nuts and started running people over, an act others sympathetic to the people Trump says are not bad people, have said was the fault of the people in front of the car.

You know; many, many sides.

Words he left out, of course, because while he cutely courts controversy over the pardon of Sheriff Arpaio (and will the courts weigh in on that if Trump sends Joe the papers?  Inquiring minds want to know.), he doesn't want any more blowback over words he's learned not to say.  Yes, like a puppy, if you hit him on the nose often enough, he'll get the message.  He won't change his tune, but he will modify the message.

And it's the fault of the media for reporting what they racists said, and for reporting what Trump said; except it isn't, as any Trump supporter will happily tell you.  And since I get the transcript from Charlie Pierce, I'll incorporate his words as if they were mine if only because he gets to an essential point, although not THE essential point:

Before we get to the other stuff, and there was lots of other stuff, I'd like to address myself to those people represented by the parenthetical notation (Applause) in the above transcript, those people who waited for hours in 105-degree heat so that they could have the G-spot of their irrationality properly stroked for them. You're all suckers. You're dim and you're ignorant and you can't even feel yourself sliding toward something that will surprise even you with its fundamental ugliness, something that everybody who can see past the veil of their emotions can see as plain as a church by daylight, to borrow a phrase from that Willie Shakespeare fella. The problem, of course, is that you, in your pathetic desire to be loved by a guy who wouldn't have 15 seconds for you on the street, are dragging the rest of us toward that end, too.

A guy basically went mad, right there on the stage in front of you, and you cheered and booed right on cue because you're sheep and because he directed his insanity at all the scapegoats that your favorite radio and TV personalities have been creating for you over the past three decades. Especially, I guess, people like me who practice the craft of journalism in a country that honors that craft in its most essential founding documents. The President of the United States came right up to the edge of inciting you to riot and you rode along with him. You're on his team, by god.

People are like this; there's no point in denying it, or covering over it, or pointing out we all have our faults, too.  We do, but our faults aren't always as deadly as faults this stupid and ignorant and steeped in self-concern and pure-as-gold selfishness.  This is the refined stuff, the mother lode, the craziest of the crazy:  and in a democracy, especially, it is deadly to the body politic.  There's no getting around that.

But it was ever thus, too.  Who do you think fought for Jim Crow laws and put up statues to Confederate "heroes" and cheered when dogs chewed black men on the streets of American cities, and were gleeful as water cannon rolled people down the streets like logs on a river?  Who do you think shouted vicious words with spit flying from their mouths at young black girls attending a school no young black girl had even been allowed to attend, who were held back from attacking them only because the President of the United States sent big men with guns to protect those small girls?  Did you think all those people went away when Obama was elected?  When King was shot down?  When business decided complying with the Civil Rights Act was better for business than not complying?  I remember the days of Walter Cronkite.  He wasn't that revered.  And he never joined forces with King and the armies of light, as we now think of them.  Journalism may be honored in our most essential founding documents, but only because journalism is so good at presenting and defending the status quo.

Not that these people are the status quo now, nor should they be.  But there weren't that many of them in the convention center, either.  The bleachers behind Trump were a small affair, holding maybe 50, maybe 100, people.  I've seen larger graduating classes.  Most left 20 minutes into his harangue, bored by his revisionist history of events they remember from two days ago.  The ones who stayed were desperate to have their prejudices and sympathies played to, and their basest desires for public power fed.

But there are as many groups for such gatherings as there are individuals to gather them.  If you want to hear two Trump supporters explain away Trump's inability to denounce racism as strongly as he denounces journalism, Here and Now offered two opportunities today:  one with an Arizona State Senator, the other with a GOP "strategist" who, like his hero Trump, managed to make it all about him.  Neither mentioned the statement of the United Nations:

Recalling its previous concluding observations of August 2014 on the United States of America (CERD/C/USA/CO/7-9) and its general recommendations No. 35 (2013) on combatting racist hate speech and No. 34 (2011) on racial discrimination against people of African descent:

1. Calls upon the United States of America to fully respect its international obligations and in particular those arising from the International Convention on the Elimination of All Forms of Racial Discrimination to combat and eliminate all forms of racial discrimination;

2. Calls upon the Government of the United States of America, including the high-level politicians and public officials, not only to unequivocally and unconditionally reject and condemn racist hate speech and racist crimes in Charlottesville and throughout the country, but also to actively contribute to the promotion of understanding, tolerance, and diversity between ethnic groups, and acknowledge their contribution to the history and diversity of the United States of America;

3. Urges the United States of America to ensure that all human rights violations which took place in Charlottesville, in particular with regards the death of Ms. Heyer, are thoroughly investigated, alleged perpetrators prosecuted and if convicted, punished with sanctions commensurate with the gravity of the crime, and provide effective remedies to victims and their families;

4. Recommends that the Government of the United States of America identify and take concrete measures to address the root causes of the proliferation of such racist manifestations, and thoroughly investigate the phenomenon of racial discrimination targeting in particular against people of African descent, ethnic or ethno-religious minorities, and migrants;

5. Recommends that the United States of America ensure that the rights to freedom of expression, association and peaceful assembly are not exercised with the aim of destroying or denying the rights and freedoms of others, especially the right to equality and non-discrimination, and that the Government of the United States of America provide the necessary guarantees so that such rights are not misused to promote racist hate speech and racist crimes.


There is a predicate to that which makes it clear the provoking incident is Charlottesville and the three responses of President Trump to that incident.

Yeah, that's what I thought, too.  The most we can do is examine ourselves, and determine which side the angels are on, and get on their side, too.  The rest is not up to us, but ensuring things like that last recommendation are ensured and upheld, especially when it becomes a 1st v. 2nd Amendment issue, is something we can do without moral peril.

It's good to know where the lines fall.

The picture this post should have had.  HUGE crowd!  Gotta be a hundred people back there!