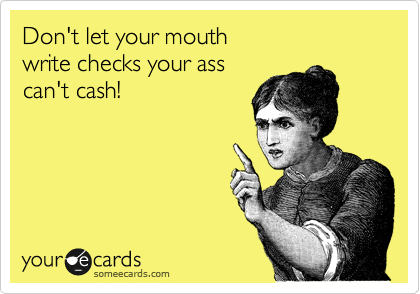 Word comes, via NPR just now, (and then from TPM, after I post) that Trump won't mention the possible pardon of ex-Sheriff Joe Arpaio because the event in Tucson tonight is "political."

Of course, nothing could be more political than pardoning Arpaio for criminal contempt of court charges.

As I said earlier, I don't think the courts would recognize the validity of such a pardon, treading as it does on the inherent power of the court to enforce its orders, a power it must maintain if courts are to function at all.  Trump saying at the rally tonight that he has pardoned Arpaio would also be without any legal significance.    When Chief Justice Marshall said that a pardon was:

an act of grace, proceeding from the power intrusted with the execution of the laws, which exempts the individual on whom it is bestowed, from the punishment the law inflicts for the crime he has committed.

He also wrote, in the same opinion:

A pardon is a deed to the validity of which delivery is essential, and delivery is not complete without acceptance. It may then be rejected by the person to whom it is tendered, and if it be rejected, we have discovered no power in a court to force it on him.

It may be supposed that no being condemned to death would reject a pardon, but the rule must be the same in capital cases and in misdemeanors. A pardon may be conditional, and the condition may be more objectionable than the punishment inflicted by the judgment.

The pardon may possibly apply to a different person or a different crime. It may be absolute or conditional. It may be controverted by the prosecutor, and must be expounded by the court.

A pardon, in other words, is a legal document, not some words allegedly said by the President in public or private.

It is the private though official act of the executive magistrate, delivered to the individual for whose benefit it is intended and not communicated officially to the court.

It is a constituent part of the judicial system that the judge sees only with judicial eyes, and knows nothing respecting any particular case of which he is not informed judicially. A private deed not communicated to him, whatever may be its character, whether a pardon or release, is totally unknown and cannot be acted upon. The looseness which would be introduced into judicial proceedings would prove fatal to the great principles of justice if the judge might notice and act upon facts not brought regularly into the cause. Such a proceeding, in ordinary cases, would subvert the best established principles and would overturn those rules which have been settled by the wisdom of ages.

I cannot say that this is settled law, but I don't think it is controverted law.  Which brings up the matter of the pardon itself.  As I understand, Trump has not appointed a Pardon Attorney; the office still exists in the Justice Department, but it has no leader.  This would also be a case of first impression:  can the President pardon in a case of criminal contempt of court?  The answer would have to be:  that's up to the court, and that's not an answer Trump would want to, well....court.  Arpaio would insist the pardon was valid, the court would deny it in order to preserve its authority over its own rulings (Trump is not pardoning a crime, but a violation of a court order), and the whole thing would create publicity and legal questions Trump wouldn't want to be tied to (or ever understand, but that's another matter).  But first and foremost, the pardon would have to be reduced to writing, which means a lawyer would have to tell the President the pardon was valid, and there wouldn't be a problem.

I strongly suspect Trump has been told there would be a problem, and he's quietly backing away from Arpaio in another example of his mouth writing a check his Presidential ass can't cash.  Keith Olbermann asked the other day:  Whatever happened to North Korea?  The answer is: China, who said any attack on North Korea would be considered an attack on China.  The answer here is:  any pardon for criminal contempt would be considered an assault not just on the minorities Arpaio oppressed, but on the judicial system itself.

And even saving Sheriff Joe's bacon ain't worth that fight.