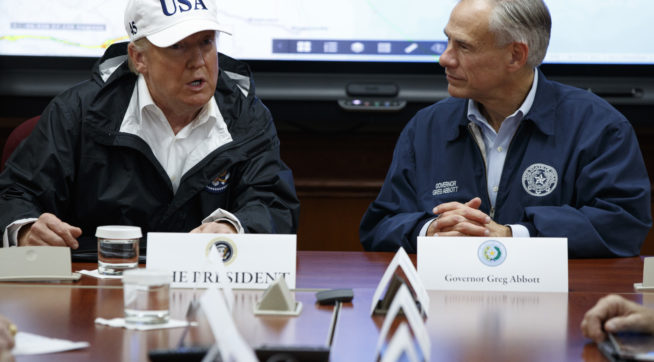 Notice which card is easily readable?

Local TeeVee is, not surprisingly, 24/7 news about Harvey, flooding, road closures, rescues, shelters, press conferences on rising bayous and falling rain and when this will all end.

Mercifully, that's kept them too busy to notice the POTUS came down to Texas:

“Harvey. Sounds like such an innocent name,” Trump said at a briefing in Austin, Texas. “It’s not. It’s not innocent.”

He said “the sad thing” about Harvey, which has a rising death toll, was that it “is longterm.”

“Nobody’s ever seen anything this long and nobody’s seen this much water,” Trump said. “Probably there’s never been anything so expensive in our country’s history.”

As someone at TPM pointed out, nothing in our country's history has been so expensive, except maybe for:

Trump's security detail for the past 6 months

I haven't been able to find news articles about what Trump said, not in any detail; so, as ever, I have to rely on the kindness of strangers:

“When the president was speaking, he mentioned the water, the wind,” Barnicle pointed out. “He mentioned four of our great congressmen in here — it’s going to be a costly proposition. They’ll come up with the right solutions. There’s never been anything like this in our experience. He thanked Ben Carson, Linda McMahon. Several others. I did not hear him speak about the victims of this flood.”


Victims?  Do they cost money?

Former FBI agent turned MSNBC analyst Clint Watts had an even harsher opinion about Trump, saying the Houston tragedy — like everything to Trump — is all about money when he promised home loans for the victims who are still being inundated and rescued from the floodwaters.

“Everything is not about money,” he bluntly stated. “It is for Trump, but it isn’t for the rest of America.”

I would cue Randy Newman at this point; but it ain't funny anymore.