"You fool! This very night your life is demanded of you!" 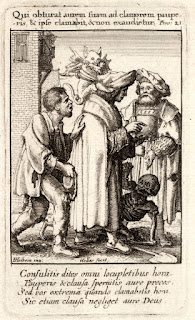 He said that many pacifist Christians will cite Romans 12, which says, “Do not repay evil for evil,” but Jeffress says that that passage is referring to Christians, not to the government.


I do like the reference to "pacifist Christians," as if we were a different and decidedly lesser brand.  Because this is the touchstone of the argument:

“A Christian writer asked me, ‘Don’t you want the president to embody the Sermon on the Mount?’ ” he said, referring to Jesus’s famous sermon. “I said absolutely not.”


Niebuhr argued that government cannot be moral, because morality requires sacrifice, and government cannot ask the sacrifice morality requires of those it governs.    Put that baldly it's an interesting argument in the face of the idea that government can ask its citizens to sacrifice in war, or in Jeffress' argument, to "quell the actions of evildoers like Kim Jong Un."  Because there's no way you do that without sacrificing a lot of people under a lot of different governments, and certainly without giving them the choice of making that sacrifice or not.  Jeffress may want Trump to battle evil, but did the rest of us sign up for that job just by being alive at this time?

Of course, in his dreams the man sees himself as a prophet (the words from his lips; I just can't believe he is such a fool.  Thanks, Zappa.):

Jeffress is no stranger to controversy. He has said in the past that former president Barack Obama paved the way for the antichrist and drew wide attention for calling Mormonism a cult during the 2012 Republican primaries. Jeffress knows his comments on North Korea could be considered controversial, even among fellow evangelicals.

“Some Christians, perhaps younger Christians, have to think this through,” he said. “It’s antithetical to some of the mushy rhetoric you hear from some circles today. Frankly, it’s because they are not well taught in the scriptures.”


Rather than argue with him about exegesis, I think of the article in La Civiltà Cattolic by Antonio Spadaro and Marcelo Figueroa, the one that prompted Patricia Miller to write:

But they aren’t objecting to the application of Christian, gospel principles to public life. What they are objecting to is the creation of an electoral juggernaut based on a cherry picking of Catholic priorities—abortion and same-sex marriage—married to a flawed theocratic vision for America. What they are objecting to isn’t the uneasy comingling of religion and politics that for better or worse has characterized America. It’s religion used in the service of politics. And anyone standing here in the summer of 2017 who doesn’t understand how badly that has gone awry are the ones who don’t understand history.

Jeffress, proud of his ignorance and arrogance, isn't explicating scripture; he is using religion in the service of his politics.  The first teaching of Christianity is humility, but he displays only arrogance.  He rejects the very heart of Christian teaching, the Sermon on the Mount, because it doesn't produce his desired end:  power and control over others.  You cannot bless the peacemakers and the meek and those who mourn and wield authority in the world.   You cannot set your anger aside and go to the altar of God, and then pick up your anger again when it's convenient to you.  You cannot turn the other cheek and still be a man of power and consequence in the world.  You cannot love your enemies if your only desire is to destroy them.  Jeffress knows this; and so the throws aside the only sermon Jesus gave, the only sermon from Jesus we have, to praise the objectives of power, of war, of the death of others and of innocents, so he can stand by the throne of the victor and rejoice in the ruler's authority.

I just can't believe he is such a fool.  He doesn't understand Christianity, or the Gospels, or the Scriptures; he only understands his own selfish desires.  To say so is not to condemn him, it is simply to recognize:  he is wrong, and it must be said he is wrong.

And we must pray he gets no closer to Donald Trump than the daily Propaganda Document.  Because Jeffress is as wrong as the President himself; and more than that I find hard to say, these days.

*and to prove Miller's words are closer to prophecy than Jeffress':

Jeffress last met with Trump in July when a group of pastors laid hands on the president in the Oval Office. He said now that health care is off the table, evangelicals are hoping for tax reform, though he didn’t have any specifics in mind.


Why in the world do evangelicals care about eliminating the ACA and gaining tax reform, except to gain the whole world and lose their own souls?