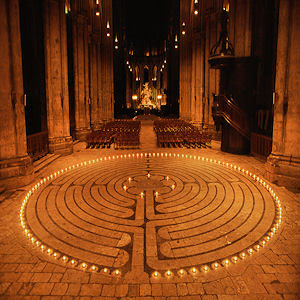 
"ONE of the distinctive features of this modern anxiety is that its victims can never know nightfall. Their whole lives are spent in the glare of lights, and what bright and blinding lights they are! These lights are, as it were, the wayward eyes of our own anxiety, which instinctively try to shield themselves against God's breakthrough. But they can glimpse God's coming against the backdrop of darkness, and therefore they never know rest.

"The anxiety-ridden cannot enjoy peace and quiet either. Their words and actions go on amid the din of unceasing noise. Their songs and pleasures are loud and slapdash, as if they were afraid to catch God's alien note in the chorus. They meticulously drown out silence with incessant talk and noisy chatter, so that they can stay at peace with themselves. It is as if stillness were a threatening cloud from which God might emerge to rend their hearts.

"Patience is another quality that the anxiety-ridden cannot display. They cannot patiently cultivate those realities that require slow development and silent blossoming: love and fidelity, mutual understanding and friendship, marriage and family life. That is why these realities are in crisis today to a greater or lesser extent, riddled with an anxiety that cannot stand the slow pace of deliberate, tender care.

"Finally, the anxiety-ridden cannot enjoy any peace. From time to time it happens that this anxiety no longer feels able to put up with itself. It seeks to neutralize our imagined alienation in God's advent by arrogantly precipitating our annihilation on its own. It stirs up strife and destruction, it foments war and revolution. The continuing brinkmanship of our age, the powder keg on which we sit, is not a political problem in the last analysis. It is really a religious problem, an outgrowth of our contemporary neurosis and our flight from God's inescapable coming.

"The anxiety-ridden secretly hope that their self-instigated destruction will ease the pressure that weighs down upon them. But even our self-wrought destruction passes away, and the anxiety remains. Its mournful cry can be heard amid the debris. It remains because we ourselves remain, because God's advent remains, and because the former cannot fight off the latter. "