On the announcement of Time Magazine's "Person of the Year" 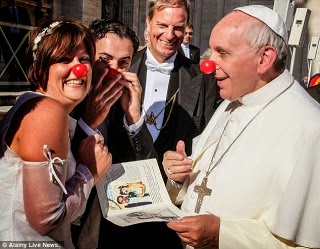 
I am grabbing this comment from ThinkProgress not because I want to malign, or even argue, with the person who made it, but because of the assumptions behind it:

-------------------, probably not wise to choose religion based on who you find popular and personable. Maybe check out the Bible or the church's teachings instead. This particular pope, for example, doesn't seem to comprehend basic economics, bless his heart.

I've had this conversation before, with people I truly love.  And my answer is always the same:  no, he doesn't.  And that's okay.

"Where your treasure is, there will your heart be also" is not some specifically Christian teaching which applies only to an inner-circle of believers who adhere to a certain doctrine.  It is a simple truth of human existence.  And so long as your treasure is in money, economics can be your ultimate determinant of what is valuable.

But if it isn't, then perhaps you should align yourself with the Pope's teachings on money and economies, and not with the actions of the former Bishop Franz-Peter Tebartz-van Elst.

(And besides: "It's a meaningless award from a meaningless magazine, designed to achieve the impossible: to make TIME relevant and interesting for a few fleeting moments," according to Glenn Greenwald.  This coming after his effort to promote Edward Snowden to the recognition singularly failed.  In other news, he reports the grapes he wanted and couldn't get were probably sour, too.)