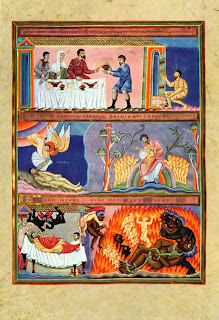 It makes me feel better that I never shop at Home Depot:

A major Republican donor, Langone told CNBC in a story published online Monday that wealthy people such as himself might stop giving to charity if the Pope continues to make statements criticizing capitalism and income inequality.

Langone described the Pope's comments about a "culture of prosperity" as "exclusionary" statements that may make some of the rich "incapable of feeling compassion for the poor."

Langone, who is leading an effort to raise money for the restoration of St. Patrick's Cathedral in Manhattan said he relayed these concerns to Cardinal Timothy Dolan in New York. Specifically, Langone said he told the church leader he spoke to a donor who could give millions of dollars to the cathedral project but was worried about the Pope's "exclusionary" remarks.

Jesus said to him, "Why do you call me good?  No one is good except God alone.  You know the commandments:  'You are not to commit adultery; you must nor murder, or steal; and you are not to give false testimony; you are to honor your father and mother.'"

And he said, "I have observed all these since I was a child."

When Jesus heard this, he said to him, "You are still short one thing.  Sell everything you have and distribute (the proceeds) among the poor, and you will have treasure in heaven.  And then come, follow me."

But when he heard this, he became very sad, for he was extremely rich.

When Jesus observed that he had become very said, he said, "How difficult is it for those with real money to enter God's domain!  It's easier for a camel to squeeze through a needle's eye than for a wealthy person to get into God's domain."  (Luke 18:13-25, SV)


That Jesus; always making the rich incapable of feeling compassion for the poor.  Or for Jesus, for that matter, who wasn't rich, either.  And, just to pile on:

The crowds would ask him, "What should we do?"

And he would answer them, "Whoever has two shirts should share with someone who has none; whoever has food should do the same....I baptize you with water; but someone more powerful than I is coming, whose sandal straps I am not fit to untie.  He'll baptize you with [holy] spirit and fire.  His pitchfork is in his hand, to make a clean sweep of his threshing floor and to gather his wheat into the granary, but the chaff he'll burn in a fire that can't be put out." (Luke 3:10-11, 16b-17, SV)


And then back to Jesus again:


Damn you rich!
You already have your consolation!

Jesus was such a buzz kill on the rich.  How are they expected to feel compassion for the poor now?  Good thing the cathedral is St. Patrick's, or rich people might not give any money to it at all.