And so this is Christmas.... 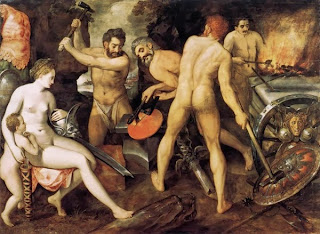 "She looked over his shoulder..."

Maybe the idea that "freedom is not free" can be traced back to Homer and the Shield of Achilles.  The shield, famously, was decorated with scenes from the daily life Achilles and the Greeks knew.  W.H. Auden reimagined it, in terms that seem oddly appropriate in this season when we celebrate the Prince of Peace (although more commonly all we celebrate is commerce and our own convenience):

The Shield of Achilles

I have nothing to add, except that "what the god had wrought/To please her son" is the world created by the insistence that might makes right, that war is peace, that freedom is only possible because warriors are our national shields.