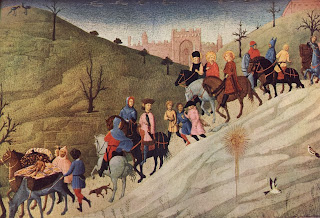 When I say we don't really celebrate a Christian Christmas in America, this is what I mean:

Christmas works for all kind of reasons, not because it is simply the festival of peace and togetherness of which Al-Khalili dreams, but because it is so much more than that. It should be considered, for example, as the first scene in a tragedy that ends on the cross. In Journey of the Magi, this is how Eliot wrote of the first Christmas as ‘hard and bitter agony’ and most , if not all, Renaissace images of the Virgin and Child contain some visual mention of the cross. Then there is the difficulty of the birth, the flight into Egypt, the slaughter of the innocents. This is not a story of peace and harmony, it is a story about the grievous lack of those things and, in that, it reflects the world as it is. Christmas only survives and Christianity only grips the imagination because it is not a fantasy, it is a truth that can only be apprehended through a story. Invent a secular equivalent and it will not last twenty years, never mind two thousand.

Christmas as we know it today has been around since about the mid-19th century, and even then Dickens revived the older version (games and parties) which developed into the gift-giving obsession and fever of possession we all know and endure today.  That part of "Christmas" is really not likely to endure.  The story:   "the difficulty of the birth, the flight into Egypt, the slaughter of the innocents," the poverty of the conditions, the tension between Joseph and Mary, between Jesus and his family:  this is a story that will renew as long as there is a human condition to reflect upon.

That is why it endures.

The silver of one star
plays cross-lights against pine-green
And the play of this silver cross-wise against the green is an old story.
Thousands of years.

And sheep grazers on the hills by night
watching the woolly four-footed ramblers
watching a single silver star.
Why does this story never wear out?

And a baby, slung in a feed box back in a barn in a Bethlehem slum
A baby's first cry,
mixing with the crunch of a mule's teeth on Bethlehem Christmas corn
Baby fists, softer than snowflakes of Norway

The vagabond mother of Christ
and the vagabond men of wisdom
all in a barn on a winter night
and a baby there in swaddling clothes on hay
Why does this story never wear out?

The sheen of it all--is a star, silver and a pine, green
For the heart of a child asking a story
The red and hungry, red and hankering heart
Calling for cross-lights of silver and green