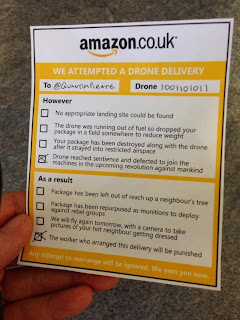 I really just wanted an excuse to use this...


This Amazon drone thing, which I was sure was a joke, is taking on a life of it's own.

In comments here at Salon, the proponents seem to think it as inevitable as the tide going out (no word on whether King Bezos could stop it coming in if he wanted to) because progress is technology and technology is inevitable.

I didn't get to put in a word for flying cars, personal jetpacks, computer controlled traffic, or videophones (yes, we have Skype, but who Skypes with someone without pre-arranging the call?  Aside from Skype, videocalls are the perfect example of a technology we have which nobody wants.).

ThinkProgress gets down to brass tacks, though.  The major problem is, the FAA won't approve this kind of thing until 2025 at the earliest (if they ever do).  Bezos may own WaPo and make deals with USPS, but he's not gonna get the bureaucracy to move any faster than it will move.

Even if he does, TP notes other objections, such as:

1) Drones are eminently hackable:  "“If you can convincingly fake a GPS signal, you can convince an (unmanned aerial vehicle) into tracking your signal instead of the authentic one, and at that point you can control the UAV.”

3)  Drones in the city, says a drone manufacturer, is "stupid."  Out in the country?  Sure, why not?  Fewer things to run into like, say, power lines (first time one stumbles across a live line and, like a squirrel I saw once, grounds it, nobody's gonna think it's so damned convenient anymore).  Which raises the next question:

How many "fulfillment centers" is Amazon gonna build so drones can be close enough to you to make the quick delivery both convenient and even possible?  Even Bezos admits the drones will only have a range of about 10 miles.  Seriously?  I drive further than that to go to work.  You gonna fly these things all over El "A", down the concrete canyons of NYC, across the freeways of Houston?  From where?

I'll be dodging 'em in my flying car by the time these things get off the ground.