“Why...are the followers of reason so unreasonable?" 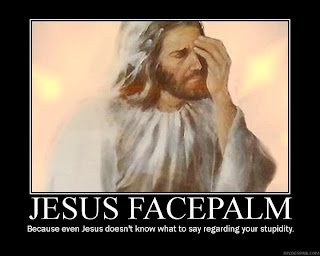 Well...somebody had to say it.

McElwee begins by calling the New Atheist movement “a rather disturbing trend” in a country “whose greatest reformer” – Martin Luther King, Jr. – “was a Reverend.” Dr. King won fame as a civil rights leader, not as a religious figure.


The historical ignorance makes the mind reel.  Does this idiot really think the civil rights movement was wholly divorced from the church?  Does he think King's religion had nothing to do with the movement at all?  To correct his ignorance, here's a quick rundown of some of King's activities in pursuit of civil rights. For another:  King's Letter from Birmingham Jail was addressed to churches, and addresses how much of King's religion is involved in his leadership of the movement seeking civil rights.  Tayler probably also doesn't realize the head of the Americans United for Separation of Church and State is a UCC minister, and if he knew, would insist the Rev. Barry Lynn's religion has nothing to do with his activism.  Funny, that, because the UCC must consider it a pastoral position, or he wouldn't still be "Rev. Lynn."

The "defense" of Hitchens, Dawkins, Harris, and Dennett (always the red-headed stepchild in these discussions) goes on to refute the idea that any of them think religion is "the sole wellspring of humankind's woes." (emphasis in original)  Well, that destroys all argument against the New Atheists altogether, doesn't it?  Because the idea that religion is a source of humankind's woes is eminently reasonable.

To somebody who knows as much about religion as the four horsemen of the atheist apocalypse know, anyway.

According to a Pew poll conducted in 2012, a record number of young Americans – a quarter of those between the ages of 18 and 29 — see themselves as unaffiliated with any religion. Atheists’ ranks are swelling, and believers are finding it increasingly difficult to justify their faith.

Because we know in America young people are the only people who count, and we know twice nothing is not still nothing (not when we don't want it to be), and America=The World, so those 1 billion Catholics (a subset of the number of Christians worldwide; and then are are the Muslisms, the Hindus, observant Jews, etc., etc., etc.) around the world don't amount to a hill of beans against a Pew poll of a few hundred Americans.

This is the general tenor of the "argument."  Notice how conveniently people are re-characterized to fit the desired conclusion:

George W. Bush was a convert to Evangelical Christianity, which does not necessarily make him a “religious extremist,” and the (mixed) faiths of the Iraq War’s other architects (Dick Cheney, Condoleeza Rice, Paul Wolfowitz, Douglas Feith, et al.) did not fuel their zeal for deposing Saddam.

And the proof of this?  Tayler said so!  What else do you need?   But for definitions that make no sense to anyone except a polemicist, this one is the best:

Religion first and foremost consists of unsubstantiated, dogmatically advanced explanations for the cosmos and our place in it, with resulting universally applicable rules of conduct.

Honestly, if you're going to be that stupid, we have nothing else to discuss.   But since you insist on prattling on:

If one breaks free of the racket of faith, then faith-sanctioned strictures, fantastic tales (human parthenogenesis among them) demanding faith to be believed, to say nothing of the justness of tax exemptions for faith organizations, all appear as entirely human creations that are questionable at best, criminal at worst, and certainly deserving of no kid-glove treatment.

The virgin birth is a Catholic teaching, and not one considered essential to Christian faith.  Indeed, the commonality of all Christians is bound up in trinitarian doctrince, confession of Christ as Son of God, of God as Creator, and of Holy Spirit as Sanctifier.  The only two sacraments which must be recognized are communion and baptism in the name of the Trinity.  That's it.  Virgin birth is an option, and not one widely adhered to by most clergy (most of us know the "virgin" Matthew identified meant "young girl" in the original from Isaiah, so we don't stumble on Matthew's nativity story, which is not, despite the season, all that central to Christianity).  Kid gloves?  Son, you can't even don kid's gloves, much less fight bare-knuckled.  Forget your arms bein' too short to box with God, your arms are too short to box with me!  Go away and come back when you have some clue as to what you're discussing.  Until then, the grown ups want to talk, and you're interrupting.

And while you're at it, learn some history, will ya?

Faith and reason are fighting for supremacy the world over, and rationalists must make their case with ardor, shying away from no battle.


Bullshit.  You may think you'll win supremacy; but you're a fool if you do.

Atheists who wobble in defense of nonbelief would do well to recall 9/11, Baruch Goldstein’s Hebron massacre of Palestinians, the Salem witch trials and violence meted out in the name of religion to “unchaste” women throughout the ages. This is, of course, an incomplete list of atrocities motivated by religion.

First, what the hell is "nonbelief" and why do you have to defend it?  Sounds like a belief system to me.  Second:  what you describe are battles for power, every one of them.  "Motivated by religion"?  No; motivated by the all-too human desire to be in charge.  You seem to be familiar with that sentiment.   You seem, in fact, to be "motivated by religion."  Maybe you should look into that.  Maybe you should familiarize yourself with the humility taught by most of the world's religions; that it is honored more in the breach generally than in the keeping specifically by people like Gandhi, Dr. King, and Nelson Mandela, is simply proof that it is indeed common to religious belief.

Why are the followers of reason so unreasonable?