A few days late, but no one is paying me to deliver sermons on time..... 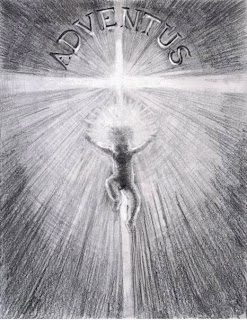 That is probably the most evocative image in Scripture; the image of swords being beaten into plowshares.  We no longer quite get the references to sheep and goats; we don't really know what shepherds did; we completely misrepresent what they represented; we aren't all that clear on "Samaritans."

We get this.  Somebody even made a statute about it: 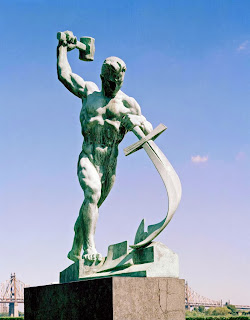 It's a nice contrast with the Son of Man: 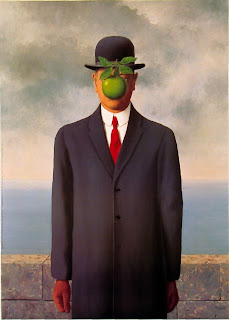 There's no image there, except people being taken away, as if some "rapture" had occurred.  Even the idea of "Son of Man" is controversial.  Did Jesus mean himself, as Jesus?  Himself as human?  As Messiah?

Opinions differ.  Let us set aside opinions.  We have no use for opinions here.  Here we stand before the revealed Word of God.  Here we don't need opinions.  We need to listen.  We need to know.
So what about the picture?  Magritte called it the "Son of Man," but what did he mean?  Who cares even about that, what does it mean?  Magritte's opinion is not binding on us, let us turn to his picture.

What do we do with it?

That which is hidden, we know, will be revealed.  But that doesn't tell us what will be known when it is revealed.  So we are back where we started.

I especially like the other image in those words of Jesus, or the homeowner staying up all night so the thief can't break in.  What does a thief do besides take things we don't want to lose?  So who is the homeowner in that analogy; and who is the thief?

And what is it that will be stolen, if we don't watch out?

That is the reason we look forward to the revelation, the apocalypse:  because then all humankind will say "Peace be within you."  This is the vision of the end, of the fulfillment, of the apocalypse:  not war and disaster and doom; peace and brotherhood and fellowship when everyone recognizes, if not the narrow reality of God, at least the wisdom of God; the goodness of creation, peace between people, the simple joy in living.  That will be the day of the Son of Man; the human one; the children of Adam.

That which is hidden will be revealed.  Try to stay awake.

What would Paul think of Black Friday and Cyber Monday?  What would he say?  Probably just chuckle and go back to stitching his nets together, waiting for the next person to wander by and engage in him conversation.  Paul pretty much lived like that:  alert to strangers, willing to accept hospitality, setting up house churches that will little more than extended families in villas. Imagine the family of Downton Abbey sitting down at the table with all their servants, and sharing a common meal as equals:  that was Paul's house church; that was Paul's vision.

Peace be within you.

That which is hidden will be revealed.

Swords will be beaten into plowshares.  Not any more, of course.  Nobody carries swords, nobody uses plowshares.  It doesn't matter.  The meaning is the same.  Keep awake.  Why?  If you are asleep, what will the thief take from you?  What is so valuable you could never, ever, afford to lose it?  If you will not let your house be broken into, how will that be the day of the Lord's coming for you?

Son of man, you do not know....but come in under the shadow of this red rock, and I will show you....what?  Fear in a handful of dust?  No.  Something new.  Even now it is about to break forth?  Can you not perceive it?  Keep awake, or you'll miss it!

Because everything that is hidden will be revealed.  Even the man behind the apple.

So keep awake.  You don't want to miss that.