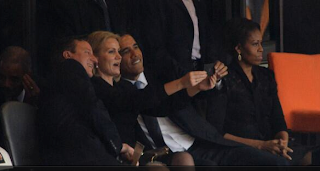 No particular reason for this, except to say that, in other countries, they do things differently:

All around me in the stadium, South Africans were dancing, singing and laughing to honour their departed leader. It was more like a carnival atmosphere, not at all morbid. The ceremony had already gone on for two hours and would last another two. The atmosphere was totally relaxed – I didn’t see anything shocking in my viewfinder, president of the US or not. ...

I heard news reports about people dancing in the rain the day of the memorial service, and even people saying tradition in Africa held that rain on such a day meant the heavens were open to bless the virtue of the dearly departed.  Where we might see rain on a funeral day as one more reason to be gloomy (and I've done funerals in snow; it's not cheering at all), they see it as another reason to give thanks for the life of the one who has died.

(Of course the really classy response is to walk out on a funeral orator, and then be sure your staff tells the press later what a noble dignitary and fine representative of your country you were to walk out on the speech of another guest in a foreign country.  Stay classy, Ted Cruz.  And stay out of Texas; we have more respect for memorial services than that.)