Is that you, Santa Claus? 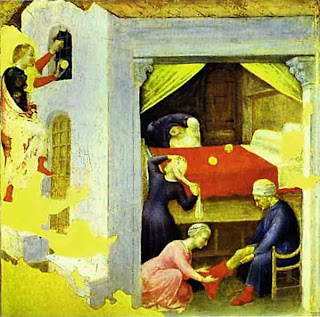 Another example of decadent socialism!

And with Santa Claus a'comin', what better time of year to remind children there is no free lunch?

Rep. Jack Kingston (R-Ga.) wants kids to learn early in life that there's no such thing as a free lunch. To make sure they absorb that lesson, he's proposing that low-income children do some manual labor in exchange for their subsidized meals.
....
"But one of the things I’ve talked to the secretary of agriculture about: Why don’t you have the kids pay a dime, pay a nickel to instill in them that there is, in fact, no such thing as a free lunch? Or maybe sweep the floor of the cafeteria -- and yes, I understand that that would be an administrative problem, and I understand that it would probably lose you money. But think what we would gain as a society in getting people -- getting the myth out of their head that there is such a thing as a free lunch," he said.

We really should just cut to the chase and bring back the workhouses of Victorian England, because it's all about instilling a strong work ethic in the next generation:

Asked for additional comment on the congressman's remarks, Kingston spokesman Chris Crawford replied, "It is sad that trying to have a productive conversation about instilling a strong work ethic in the next generation of Americans so quickly devolves into the usual name-calling partisan hysteria. Having worked from a young age himself, Congressman Kingston understands the value of hard work and the important role it plays in shaping young people."

But does he understand the role poverty plays in shaping young people?  Ironically, St. Nicholas did.

One story tells of a poor man with three daughters. In those days a young woman's father had to offer prospective husbands something of value—a dowry. The larger the dowry, the better the chance that a young woman would find a good husband. Without a dowry, a woman was unlikely to marry. This poor man's daughters, without dowries, were therefore destined to be sold into slavery. Mysteriously, on three different occasions, a bag of gold appeared in their home-providing the needed dowries. The bags of gold, tossed through an open window, are said to have landed in stockings or shoes left before the fire to dry. This led to the custom of children hanging stockings or putting out shoes, eagerly awaiting gifts from Saint Nicholas. Sometimes the story is told with gold balls instead of bags of gold. That is why three gold balls, sometimes represented as oranges, are one of the symbols for St. Nicholas. And so St. Nicholas is a gift-giver.

He really should have taught those girls the value of hard work.