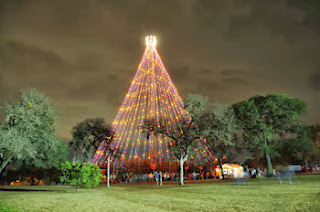 The Christmas Tree isn't of "pagan origin." In fact, of all things related to Christmas, it's probably the only one that is almost entirely a product of a Christian culture.

Not that it really matters; the insistence that "Christian" practices be pure and untainted by non-Christian (i.e., "pagan") practices is a silly one that dates back (again!) to the Puritans (see below).   Why we insist on keeping it up is another cultural practice very peculiar to Americans (equally peculiar is the idea that we are the world and our Christianity is world Christianity.  But that's another hobby horse....).


The tree is a seasonal decorative item.  Rather like the concept of communion, it springs not from some cultural icon co-opted by the new dominance of Christianity in the dark places of ancient history, but from Christian sources:  specifically, the Genesis story and the Paradeisbaum inspired by German morality plays and the veneration of Adam and Even in the Eastern church which spread, unofficially, westward.

CHRISTMAS Eve is the feast day of our first parents, Adam and Eve. They are commemorated as saints in the calendars of the Eastern churches (Greeks, Syrians, Copts). Under the influence of this Oriental practice, their veneration spread also to the West and became very popular toward the end of the first millennium of the Christian era. The Latin church has never officially introduced their feast, though it did not prohibit their popular veneration. In many old churches of Europe their statues may still be seen among the images of the saints. Boys and girls who bore the names of Adam and Eve (quite popular in past centuries) celebrated their "Name Day" with great rejoicing. In Germany the custom began in the sixteenth century of putting up a "paradise tree" in the homes to honor the first parents. This was a fir tree laden with apples, and from it developed the modern Christmas tree.

And while we're on the subject, no, Christmas is not Saturnalia sanctified.  It probably is taken from the Natali Invictii of Rome (at least when it started in Rome).  But it also started elsewhere on January 6, and where it was set on December 25th the reasoning had to do with the Day of Atonement and Zechariah's Temple duty.  You could look it up.  The idea that it was the Saturnalia is most likely from Increase Mather (or some other Puritan), who was no fan of Christmas to begin with, for reasons a lot of atheists and others sick of the holiday taking over the last 3 months of the American calendar might well sympathize with:

As for the word itself, that didn't come into use until 1038; at least, New Advent says that's the earliest recorded appearance of the word.  The feast first appeared in 354 in Rome; as early as 200 C.E. in Alexandria.  And as for "Xmas," well....we've done that.