"Running from the law King Herod has impos-ed" 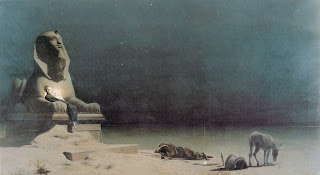 As part of the long process of formalizing a celebration of the birth of Christ–which includes shifting the purported date of Jesus’ arrival in the world to midwinter to co-opt pagan observances and then suppressing said observances–Saint Nicholas gets mashed up with other figures.


Is this a religious claim?  Or a claim for power?

The usual "historical" analysis of the timing of Christmas (wrong, for the most part) is that it stomped all over a pagan holiday.  Some say Saturnalia (completely wrong), some say, more soundly, that it took root in the Natali Invictii observed in Rome on what is now Dec. 25.  The importance and singularity of Rome there cannot be overstated, as the observance of a feast for the nativity began as early as 200 C.E. in Alexandria, although it was in the spring, not winter.  Several locations took up various times of year for observing the Nativity, and only over 2 centuries did it settle on first January 6, and then December 25.  The shift in dates in some regions had to do with a calculation based on the Day of Atonement and Zechariah's Temple duty.  You could look it up.  The idea that it was the Saturnalia is most likely from Increase Mather (or some other Puritan), who was no fan of Christmas to begin with, for reasons a lot of people sick of the holiday taking over the last 3 months of the American calendar might well sympathize with:

But the date of December 25 probably corresponded with a holiday in Rome, and so as Rome Christianized such holidays were made over into Christian holidays.  Then as the church centralized in Rome, important feast days regularized to prevent confusion.  By the same token the Thunderbird stopped being something from Native American lore and became an automobile (and alcohol, ironically).  Yes, Native American culture was crushed in America, but not so we could name a car.

As for the word itself, that didn't come into use until 1038; at least, New Advent says that's the earliest recorded appearance of the word.  The feast first appeared in 354 in Rome; as early as 200 C.E. in Alexandria.

I mention this because the history we "remember" is not the history humankind necessarily lived through.  It is perfectly valid to say Europeans crushed the native cultures of America almost as soon as they could; and perfectly ridiculous to even infer we did so in order to name an automobile.  But the idea that Christians oppressed Rome into giving up a holiday for Jesus is equally as absurd.  That is the convention, though; that "pagans" were "suppressed" by Christians in ways apparently analogous to how Native American culture was suppressed by Europeans.  We see it through an ahistorical lens, in other words; and then decide "religion" is, and was, predominantly about power.

We are humans.  One way to look at us is to identify everything we do as being about power.  What makes that an interesting analysis at this time of year is that the Christmas story is all about powerlessness.

Joseph is a carpenter.  He is not a man of means, a union member, a journeyman who sits atop the rest of the construction workers because he has skills that make him valuable from ground breaking to completion.  He is an almost employed beggar.  There is no market economy in 1st century Palestine.  Joseph lives like everyone else does:  by connections to a patron.  But as a carpenter, he has few such connections.  He may be slightly better off than the fisherman who come into the story later, but they might exceed him because at least they have something to sell that everyone needs.  Only people with extra money need a carpenter, and then only briefly.  Joseph is a poor man.

Mary is a child.  She's lucky Joseph doesn't accuse her of adultery, when she turns up pregnant without him.  And Jesus is born in a feeding trough because that's where peasant babies are laid in 1st century Palestine.  And he's visited by shepherds, the bikers and outlaws of the day; men who stink of sheep and sweat and are more like the "mountain men" of American history than not.  And his life is threatened within two years of his birth; his family has to flee to Egypt while Herod exerts his power as king, his absolute power over life, by slaughtering every male child two years old and under in Bethlehem.

This is a story of power, but the power doesn't reside with the mensch, the virgin, or the god.

These concerns over power are themselves "religious," if by "religious" you mean endemic to any community of believers.  Pope Francis, for example, is moving to reform the Vatican, shifting the emphasis from rules to mission.

"The thing the church needs most today is the ability to heal wounds and to warm the hearts of the faithful; it needs nearness, proximity. I see the church as a field hospital after battle."


He is not interested in church reform that amounts to a mere rearranging of the ecclesiastical furniture. Authentic ecclesial reform will be in service of the church's mission. In an address to the coordinating committee of the Episcopal Conference of Latin America, or CELAM, during his visit to Brazil in July, he said:

The "change of structures" [from obsolete ones to new ones] will not be the result of reviewing an organizational flow chart, which would lead to a static reorganization; rather it will result from the very dynamics of mission. What makes obsolete structures pass away, what leads to a change of heart in Christians, is precisely missionary spirit.

That, of course, prompts a response:

"The service of the Roman Curia is part of the very nature of the church, and so that has to be respected," Cardinal Raymond  Burke told EWTN, a U.S.-based Catholic cable network that spotlights conservative views.

"I can't imagine that somehow the Roman Curia is going to take on a completely different figure. It just doesn't make sense," Burke said. The interview was broadcast Thursday as the centerpiece of a program that highlighted concerns about the direction of the church since Francis was elected in March.
...
But Burke told EWTN that it was "not altogether clear what the results of the reform will be" and lamented what he described as "a kind of unpredictability about life in Rome in these days."

Indeed, you can draw a very bright line between Cardinal Burke and Pope Francis from their own words:

"One gets the impression, or it's interpreted this way in the media, that he thinks we're talking too much about abortion, too much about the integrity of marriage as between one man and one woman," Burke said. "But we can never talk enough about that!"
....
"When the dialogue among the people and the bishops and the pope goes down this road and is genuine," the pope contends, "then it is assisted by the Holy Spirit."

The Holy Spirit, need I say, is never about power; not even the power of persuasion.  Access to the Holy Spirit comes only through vulnerability; through what St. Therese of Lisieux called "The Little Way."  One might say the Pope wants his church to be more "catholic" by being more small, more concerned with little things.

Whether that is seen as co-opting what was in place when he rose to the Papacy, or not, depends on your perspective.