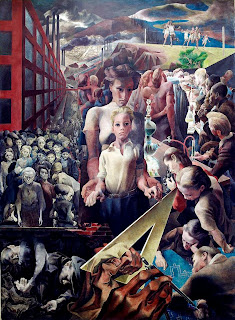 11:4 but with righteousness he shall judge the poor, and decide with equity for the meek of the earth; he shall strike the earth with the rod of his mouth, and with the breath of his lips he shall kill the wicked.

11:6 The wolf shall live with the lamb, the leopard shall lie down with the kid, the calf and the lion and the fatling together, and a little child shall lead them.

11:7 The cow and the bear shall graze, their young shall lie down together; and the lion shall eat straw like the ox.

11:8 The nursing child shall play over the hole of the asp, and the weaned child shall put its hand on the adder's den.

11:9 They will not hurt or destroy on all my holy mountain; for the earth will be full of the knowledge of the LORD as the waters cover the sea.

11:10 On that day the root of Jesse shall stand as a signal to the peoples; the nations shall inquire of him, and his dwelling shall be glorious.

"He shall not judge by what his eyes see, or decide by what his ears hear; but with righteousness he shall judge the poor, and decide with equity for the meek of the earth; he shall strike the earth with the rod of his mouth, and with the breath of his lips he shall kill the wicked."

No, not really.  Christmas isn't really all about one thing, or another.  But combine that verse from Isaiah with Mary's song when she speaks to her cousin, and you are much closer to the "real meaning" of the Christmas season than Sarah Palin or Bill O'Reilly ever come.

And yet none dare call it Christianity.

Well, in this country, anyway; in public, anyway.  But the Messiah Isaiah anticipated would judge the poor with righteousness; not based on what could be seen or heard.  Not based on their rags, or their complaints, or their begging, or their homelessness; not based on whether they have cell phones or TV's, or whether they "deserved" to be poor.  Joseph and Mary, after all, were poor.  Joseph was a carpenter; which only meant he wasn't a beggar, but he might as well have been.  He wasn't a union man with a steady income in a capitalist market society.  He was a man who lived in hope of finding work from someone who might hire him.  Jesus grew up among poor people.  Jesus was a poor person.

And he struck the earth with the rod of his mouth; the breath of his lips killed the wicked, even if they did not know they were dead.  And all because he was given God's justice:

72:18 Blessed be the LORD, the God of Israel, who alone does wondrous things.

72:19 Blessed be his glorious name forever; may his glory fill the whole earth. Amen and Amen.

Alright, the Psalm is for an anointing, not for the Messiah; but the sentiment of Isaiah prevails:  "May he judge your people with righteousness, and your poor with justice.  May the mountains yield prosperity for the people, and the hills, in righteousness."  Prosperity flows from justice, judgement rests on righteousness.  We get this entirely backwards, now.  Righteousness flows from prosperity.  "What keeps mankind alive?", if not wealth and power and a return on investment?  What is the true value of the Christmas season if not the filling of the coffers of merchants and manufacturers?  What better proof of justice is there, than that we all get larger TV's and "smarter" cell phones annually?  Justice is what we impose on others, prosperity what we deserve for being alive.  Righteousness is what we keep for ourselves, judgment is for the poor who have no power to judge us in return.  Righteousness and peace abound not because our rule is just, but because our army is strong, our military revered for preserving our freedom.  The Lord the God of Israel does not do wondrous things, we do; and we do it in the name of our ability to do it, in the name of our economic system, in the name of the money that is our true idol and worship.

Romans 15:4-13
15:4 For whatever was written in former days was written for our instruction, so that by steadfastness and by the encouragement of the scriptures we might have hope.

15:5 May the God of steadfastness and encouragement grant you to live in harmony with one another, in accordance with Christ Jesus,

15:6 that together you may with one voice glorify the God and Father of our Lord Jesus Christ.

15:7 Welcome one another, therefore, just as Christ has welcomed you, for the glory of God.

15:8 For I tell you that Christ has become a servant of the circumcised on behalf of the truth of God in order that he might confirm the promises given to the patriarchs,

15:9 and in order that the Gentiles might glorify God for his mercy. As it is written, "Therefore I will confess you among the Gentiles, and sing praises to your name";

15:11 and again, "Praise the Lord, all you Gentiles, and let all the peoples praise him";

15:12 and again Isaiah says, "The root of Jesse shall come, the one who rises to rule the Gentiles; in him the Gentiles shall hope."

15:13 May the God of hope fill you with all joy and peace in believing, so that you may abound in hope by the power of the Holy Spirit.

Where, then, is the hope?  Where is the rescue?  Why is everything about Christianity so depressing, so relentlessly critical?

Isaiah speaks of hope; the Psalmist sings in joy for the king anointed by God to shepherd the people.  If the hope is removed, perhaps we are the ones removing it. Paul puts it to the church in Rome, the one that is most important, the one tradition says was founded by James, brother of Jesus:  "Welcome one another, therefore, just as Christ has welcomed you, for the glory of God."  He's telling us:  "Do something."  Welcome one another as Christ welcomed you.  And don't do it for yourself.  Do it for the glory of God.  Because "the root of Jesse shall stand as a signal to the peoples; the nations shall inquire of him, and his dwelling shall be glorious."  Where will that dwelling be, except among people like you and me, and the Romans in the church Paul wrote to?  Because "...that's what Christmas is all about, Charlie Brown."  Because this is Advent, which means we must prepare the way of the Lord:

Matthew 3:1-12
3:1 In those days John the Baptist appeared in the wilderness of Judea, proclaiming,

3:2 "Repent, for the kingdom of heaven has come near."

3:3 This is the one of whom the prophet Isaiah spoke when he said, "The voice of one crying out in the wilderness: 'Prepare the way of the Lord, make his paths straight.'"

3:4 Now John wore clothing of camel's hair with a leather belt around his waist, and his food was locusts and wild honey.

3:5 Then the people of Jerusalem and all Judea were going out to him, and all the region along the Jordan,

3:6 and they were baptized by him in the river Jordan, confessing their sins.

3:7 But when he saw many Pharisees and Sadducees coming for baptism, he said to them, "You brood of vipers! Who warned you to flee from the wrath to come?

3:9 Do not presume to say to yourselves, 'We have Abraham as our ancestor'; for I tell you, God is able from these stones to raise up children to Abraham.

3:10 Even now the ax is lying at the root of the trees; every tree therefore that does not bear good fruit is cut down and thrown into the fire.

3:11 "I baptize you with water for repentance, but one who is more powerful than I is coming after me; I am not worthy to carry his sandals. He will baptize you with the Holy Spirit and fire.

3:12 His winnowing fork is in his hand, and he will clear his threshing floor and will gather his wheat into the granary; but the chaff he will burn with unquenchable fire."

Granted, John sounds harsh; but this is what he says:  "Repent, for the kingdom of heaven has come near."  And we've heard that, and we know it means crawl on your knees in sackcloth and ashes across sharp stones, abasing yourself and declaring that your not worthy.

Or:  he just means "Turn around; you don't want to miss this."

He says:  "Bear fruit worthy of repentance."  And we know he means:  nothing you do is good enough, everything you do is sinful and foul, start now in sorrow and misery and confession of your worthlessness, and maybe you'll escape too harsh a judgment.

Or:  he just means "Do good to each other, take care of each other, love one another, and your repentance, your turning around, will be true and real and change you; and you won't continue hurting others, and just fooling yourself."

He says "I baptize you with water for repentance, but one who is more powerful than I is coming after me; I am not worthy to carry his sandals.  He will baptize you with the Holy Spirit and fire.  His winnowing fork is in his hand, and he will clear his threshing floor and will gather his wheat into the granary; but the chaff he will burn with unquenchable fire."  And we know he means:  you are up the proverbial creek without any means of locomotion, and the dam is bust and the flood of sh*t is coming, and you're gonna be right in the middle of it, and then you'll be sorry!

Or:  he just means "My way's are not God's ways.  God is as far above us as the heavens from the earth, and as different, and yet as connected, and what God brings will seem like chaos and disorder and even hell, because justice is hard if you aren't prepared for it, if you don't get used to it, so about that kingdom of heaven and turning around; it's time to get started, before it catches you off guard.  Righteousness and justice are gonna seem harsh because you aren't used to them; but they are coming.  Defending the poor and delivering the needy will mean crushing the oppressor; the breath of the lips of justice will seem like death to the wicked, and justice will seem like a blow on the earth to the powerful.

"Because one thing is sure:  God's kingdom is coming." 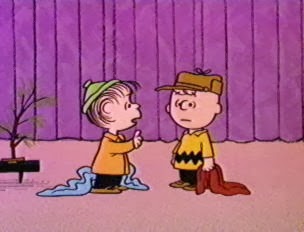