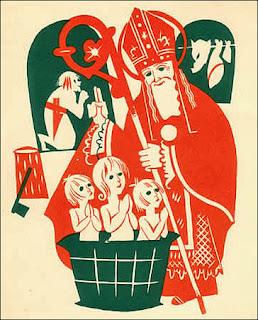 You know, there is no wealth management in charity

Since it is St. Nicholas's Day, let us now praise capitalism with timely holiday advice:

“On a short term basis, do whatever it takes to dig out from your holiday debt,” said one article on the McResource Line website, a screen grab of which was provided by Low Pay Is Not OK.

“You may want to consider returning some of your unopened purchases that may not seem as appealing as they did. Selling some of your unwanted possessions on eBay or Craigslist could bring in some quick cash," it continued. “Consider bringing a brown bag lunch and skipping the takeout …. You might also consider a temporary part time job to dig out of debt quickly.”

This from the corporation which opposes raising the minimum wage for its employees.  An issue that doesn't address the fact most employees in fast food (unless it has becoming dramatically more generous since I worked behind a deep fat fryer) work less than 20 hours a week for any one restaurant.  McDonald's earlier gave more helpful advice via a financial planning guide:

Suggested monthly expenses include $20 for health care; $600 for rent; and $150 payment for a car (that apparently needs no gas.) Unfortunately the budget doesn't have an allowance for food.

Financial planning for people on minimum wage earning $2000 a month (the basis for the "budget" in the guide) is as important as it is for lawyers and doctors, because "even doctors and lawyers spend more money than they make and all types of people can use financial help."  Because when a doctor overspends and a McDonald's worker struggles to pay the rent, it's really the same problem.

But wait!  It gets worse!  Here is Alice Wood, founder of the company McDonald's used to prepare its financial guide for the people it employs and obviously relate to as well as Scrooge related to Bob Cratchit:

"In one of our generic budgeting samples that was created in 2008 we used actual information that was gathered from interviews with a number of minimum wage employees. The line used for income from a second job can mean the person was working two jobs, or there may have been another person in the household bringing in a second income. The figures used were after all withholdings including taxes and health insurance premiums. I don't recall the number of hours the person worked but it was based on the actual minimum wage in 2008. Heat was included in the rent for more than one of the people interviewed so it wasn't included as a line item in the budget. The health insurance expense should have actually said 'health care expenses' and that figure was based on a co-payment for a doctor's visit," she wrote in an email to CNBC.

I'm seriously wondering how many part-time employees as McDonald's get health insurance included, even as something they can pay for.  Ms. Wood isn't sure, either:

"The income is after all withholding including health insurance premiums. Some companies cover more than others so it's a little hard to be completely accurate in this regard as far as what part of the premium is covered by the employer and what part of the premium is covered by the employee. It could be that some employees actually have no health insurance coverage so they don't have any expense for health insurance ... but they could definitely have health care expenses. There just isn't a one-size fits all budget for minimum wage employees ... or any employee for that matter. That's why we leave a blank page for people to use that will fit their individual circumstances. Everyone can benefit from having a handle on their finances and that includes knowing what's coming in and what's going out."


I can tell Ms. Wood from experience that, if you are making $2000 a month, you have a damned good idea what's coming in and what's going out, and you know the problem isn't a matter of frivolous spending. $600 rent?  $150 for a car payment (which not only needs no gas, but never needs tires or oil or any maintenance; or insurance, for that matter)?  This is not the budget of an adult, it's the budget of a teenager still living at home, dreaming of adulthood.


Does this advice to McDonald's employees sound harsh, grating, cruel?  Does it sound like Scrooge, when we should show sympathy for Cratchit?  Well, from the point of view of "wealth management," Scrooge is the hero of that story (before he weakens); Cratchit the author of his own doom.


If Cratchit just managed the wealth of his income (better than a policeman's pay, and "well above the truly needy!") he'd have no reason to complain.  Not that he does, of course.  But neither should we feel sympathy for him. And while Dickens knew about poverty and pawnshops from personal experience,  what does that matter in the face of theory?! (the very theories Dickens lambasted in A Christmas Carol, but leave Irony to boil Mr. Perdue in his own pudding, and let us move on)

The lesson for St. Nicholas' day is:  "Where your treasure is, there will your heart be also."  If you can call such a wizened thing as some people seem to have a "heart."