Why We Should Not Sanctify Mandela 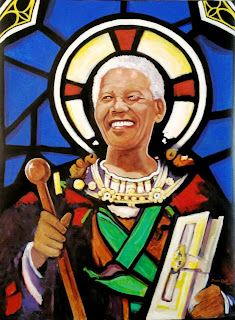 "The twisted lives of saints..."

Chris Hayes provided the object lesson, when he was surprised to come across TV news footage in which the Rev. Martin Luther King, Jr., was treated neither with the respect due a Reverend, nor the honors due a king, nor as the secular saint Christ Hayes grew up knowing MLK to be.  Now Mandela finally "belongs to the ages," but we all know what that means:  he belongs to us.  Now, what are we doing to do with him?

Why, even Ted Cruz spoke nice about him on Facebook, so everybody now reveres Mandela, right?  Read a few of those comments and you'll soon figure out who is an American supporter of Ted Cruz, and who is not an American in those comments.  Mandela belongs to the world, not just the ages; but America still thinks it is the world, so who gives a wet snap what foreigners think?

This discussion, in other words, is going to be entirely entre nous, even though it has less to do with us than most of the rest of the world.  Oh, if only....

69 unarmed South Africans...were gunned down by police in the Sharpeville Massacre in 1960, or ... 13-year-old Hector Pieterson along with upward of 176 protesters—many of them students—[was killed] in the Soweto Uprising in 1976. Or Steve Biko, the 30-year-old founder of the Black Consciousness Movement...[who] was clubbed to death by police for organizing the Soweto protest.

It has a lot to do with us because once we overruled our Presidential Saint, the apartheid regime in South Africa starting facing its biggest obstacles.  But now the discussion is about not whether Mandela was a saint, but just how saintly he was.  Even his statement at Rice University, where he said he wasn't a saint unless saints are sinners who keep trying, is used as evidence for his beatification.  The problem is, the church controls saints, and saints control ordinary lives; or at least they are meant to.  Saints are meant to be examples not of who we are, but of what we should be.  Secular saints, like Mandela or Martin Luther King or Ghandi,  are not saintly, they are paper mache idols; they are plastic objects of our adoration, plaster statutes of our embalming.

I come to praise Mandela, not to bury him.  Sainthood would be worse than burial.  Through the process of this secular beatification we get the nonsense Charles Pierce has identified:

By the guiding light of Ronald Wilson Reagan, many young conservatives like me spent much of the 1980's fighting Marxism-Leninism -- from the classrooms of radical campuses to the battlefields of Grenada, Nicaragua, and El Salvador, both overtly and covertly.

Between the vainglory and the historical amnesia, it's a wonder Murdock doesn't walk the wrong way into traffic, pounding his chest and demanding the finest mead in the land. (As a point of historical fact, Murdock's fight against Marxism-Leninism took place mainly on the battlefields of some cafeteria or another.) On the actual battlefields, of course, Grenada was a joke, and was an obvious attempt to distract the fact that Reagan and his people had left 241 Marines to die in Beirut. Nicaragua was the place where we helped finance our terrorists by selling weaponry to the people who sponsored the killing of said Marines. And the "battlefields" of El Salvador, where Murdock did such proud (if largely vicarious) service included a roadblock where four American nuns were murdered, a university where six Jesuit priests and the members of their domestic staff were slaughtered, and a hospital chapel where Archibishop Oscar Romero was gunned down while saying Mass. The "guiding light" was a burst of swamp gas in the middle of an incalculable moral morass. Ah, as our old friend, Mr. Dooley, sez, thim was the days.

We remember everything by our lights, in other words, with no regard for what the world saw or remembers.  How many Americans even know the names of the four American nuns, much less why they died?  Who in America connects the murders in El Salvador to Reagan?  He is what it means to be secularly sanctified in this country:  we remember of him only what suits our predilections.  If he is a saint, Mandela, like King, like Ghandi, should be nowhere in such company.

Now that he’s dead, and can cause no more trouble, Nelson Mandela is being mourned across the ideological spectrum as a saint. But not long ago, in Washington’s highest circles, he was considered an enemy of the United States. Unless we remember why, we won’t truly honor his legacy.

We can do better because:

It’s also disrespecting Mandela to leave his radicalism out of his tributes. For a time he believed ending apartheid would require armed resistance, and although he eventually renounced violence, he refused to do so as a condition of being released from prison. He was a revolutionary who believed in a radical redistribution of wealth, and a global warrior against poverty, to the end. Yes, it’s important to remember his legacy of reconciliation, and love, toward white South Africans who had brutalized him. But it’s equally important to remember the commitment to equality that let him endure prison, and adopt reconciliation as the best strategy to achieve freedom and justice.

We can do better because we deserve it, and Mandela deserves it.  And we certainly don't need  another plastic statue to stick on our nation's dashboard.