The Constitutional Crisis No One is Noticing 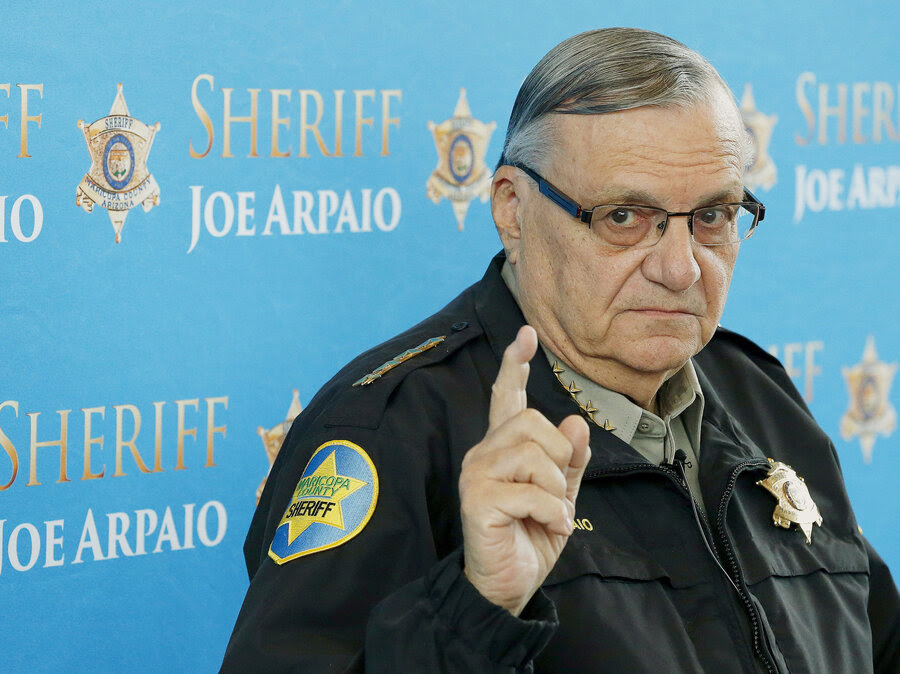 CNN on what Arpaio did to be found in criminal contempt:

"Not only did (Arpaio) abdicate responsibility, he announced to the world and to his subordinates that he was going to continue business as usual no matter who said otherwise," wrote US District Judge Susan Bolton in the July 31 order finding Arpaio guilty of criminal contempt.
,,,,
Bolton's decision arose from a finding of civil contempt by US District Court Judge G. Murray Snow in the racial-profiling case of Melendres v. Arpaio, first filed in 2007. Beginning in 2011, Snow ordered Arpaio to stop detaining people based simply on a belief that they were in the country illegally, rather than suspicion that a crime has been committed.

Arpaio refused to comply, even though Maricopa County lawyers warned him about the magnitude of Snow's order and advised him not to pick up people unless grounds existed for state charges.

After the first order in 2011, Arpaio told various television reporters that he would "never give in to control by the federal government," that he would not "back down" and "if they don't like what I'm doing get the laws changed in Washington."

Bolton said that Arpaio and others in his department continued to round up people and try to turn them over to federal officials.

In 2013, as the racial profiling lawsuit was being resolved, Snow issued a permanent injunction preventing the sheriff's office from "detaining, holding, or arresting Latino occupants of vehicles in Maricopa County based on a reasonable belief, without more, that such persons were in country without authorization."

The order made clear that the sheriff lacked the authority to try to pursue immigration violations, and that Arpaio and his deputies would be violating the constitutional protections against unreasonable searches and seizures if they held people who were not suspected of committing state crimes.

Arpaio argued that he had authority to try to work with federal agencies to find immigration violations. Without agreeing with the premise, Bolton wrote that even if that were true, once Snow issued his first order in 2011 -- blocking the sheriff from picking up people for whom no criminal charges existed -- Arpaio was on notice that his practices violated Fourth Amendment rights and he had to stop the practice.

None of the warnings mattered to him, Bolton concluded, noting that Arpaio "stated on numerous occasions that he would continue to keep doing what he had been doing."

I freely admit my conclusions on this matter are based on a law review article and a few internet citations  I haven't done a legal brief on this issue, and there's no way of knowing whether the court has started one, or will consider one.  It may be the federal judge considers a Presidential pardon the final word, and release Arpaio from the contempt charge if a pardon is properly presented to the court.  Or it may be the court is fully aware a civil contempt order cannot be pardoned, and set some clerks to researching whether a criminal contempt order can be pardoned, and make a federal case, as the public says, out of it.  Arpaio was found guilty of civil contempt for his actions in 2016, which led to a criminal contempt ruling in July 2017.

Given the nature of the order, the facts, and that courts don't issue criminal contempt orders lightly, especially for contempt that doesn't occur in the courtroom (when you see a lawyer sent to the cells for behavior in the courtroom in a fictional court, that's criminal contempt.), I still expect a fight.  Courts seldom find criminal contempt for behavior not right in the court's presence.  This order is serious, so I'm expecting the court to treat a pardon with a jaundiced eye, not as a get out of jail free card. Vanita Gupta, president of the Leadership Conference on Civil and Human Rights, is quoted by CNN saying the pardon of Arpaio would excuse "racist and illegal policing."

It would also excuse thumbing one's nose at the court, as well as the Constitution.  I'll be more disappointed with the court for letting that happen, than with Trump for issuing the pardon.

Gupta, a former head of the Justice Department's civil rights division in the Obama administration, said in a statement, "If President Trump uses his power to pardon a discredited law enforcement official who persistently engaged in racial profiling of the Latino community, it will not be a dog whistle to the so-called 'alt right' and white supremacists, but a bullhorn."

Once again, we're in a land where anything goes because no one knows.  The same article cites a Huffington post article where a former U.S. Pardon attorney says Trump could just shout his pardon out the window, or publish it on Twitter.  But as any good lawyer knows, what works is what the court accepts; and no lawyer would advise the President to issue a pardon on Twitter.  The courts have seldom been asked to consider the validity of a pardon (U.S. v. Wilson presented the issue in 1833, where Wilson didn't want to accept the pardon.  It was held that if he declined it, he wasn't pardoned for the offense of which he'd been found guilty.).  Going through the standard procedure is what most lawyers do just to be sure they aren't embarrassed by a judge who finds their procedure so irregular she won't approve it, for fear of being found wrong herself.  Why else do you think legal documents said "Know all men/persons by these presents," "whereas," "wherefore,"  and "too whit too whoo" for so long?

All this really tells us is that nobody knows what's going on and Trump couldn't care less.  He's probably forgotten about Arpaio again (who can forget Trump entering the room full of reporters at the White House to sign something, talking to the press, and distractedly walking away again?  When Pence called him back, Trump said something and walked out of the room.  Don't tell me he's deeply involved in this issue.).  At any rate, it's more of a mess than the stories that paperwork is ready and just awaiting Trump's ink:

As a legal matter, White House lawyers believe the contempt charge is reversible because, they say, the federal court order Arpaio ignored -- which served as the basis for the contempt charge -- is unconstitutional. The federal court said in 2016 Arpaio's policy of using traffic stops and workplace raids to find suspected undocumented immigrants constituted racial profiling. He was convicted in July for ignoring a U.S. court order to stop traffic patrols targeting immigrants.

The White House legal team has also advised Trump to wait for sentencing under the belief the sentence could be lenient and not include any jail time for Arpaio. Sentencing is scheduled for Oct. 5.

In response to a report by CNN that the documents for a pardon have already been completed by the White House, the sources vehemently denied any paperwork or supportive talking points have been prepared for an Arpaio pardon. The discussions, the sources said, have been lively, and Trump has been very involved.

The court order being unconstitutional smacks more than a bit of ideology to me.  You imagine there are any non-feverishly ideological White House lawyers right now?  Me, neither.  But I've no doubt the conversations have been lively.  As for Trump's involvement?  Yeah, only if they keep mentioning his name over and over again.