Sen. Sanders, Admiral Akbar would like a word with you.... 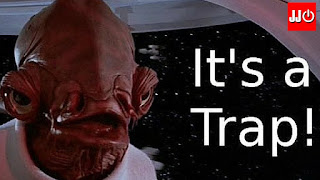 This is apparently the story of Trump v. Sanders in a debate sans Hillary:

On ABC's "Jimmy Kimmel Live!" Trump was asked if he would consider holding a debate with Sanders. Trump agreed to the idea. "If he paid a sum toward charity I would love to do that," said the business mogul, noting that a Sanders vs. Trump debate "would have such high ratings." Sanders quickly responded with a tweet reading, "Game On. I look forward to debating Donald Trump in California before the June 7th primary."

Here are the problems with it:

1)  Twitter says CBS has reports from the Trump camp that "nah gonna happen."  Yeah, it's Twitter, and it's completely unattributed.

3)  Note the condition Trump put on this:  "If he paid a sum toward charity...."  Plenty of room there for Trump to say whatever sum Sanders offers to put up wouldn't be enough, and for Trump to shame Sanders for being cheaper than Trump (and allow Trump to move away from having to talk about his own charitable donation problems.)

4)  Note, too, Sanders' tweet said nothing about any contributions to charity.

And then there's the one Charlie Pierce raises:

The alternative is to believe that Sanders has gone crazy from the heat and decided that the best thing he can do as a national politician is to collaborate in a silly and dangerous carny sideshow act that can have only one result: the spectacle of two aging white men slamming the first woman ever to have an odds-on chance to be president of the United States.

So, yeah, this is completely "heads I win, tails you lose."

At a press conference in North Dakota on Thursday, Mr. Trump suggested that he was serious about the debate on the condition that the networks would donate $10 million to $15 million of the proceeds to charities that support women’s health causes.

Trump the "billionaire" wants people to forget the problems he had donating $1 million as he promised he would do from his last non-debate appearance.  Anybody think he's not putting this number out there knowing the networks won't go for it?  And what is the Sander campaign saying?

"We hope that he will not chicken out," [Sanders campaign manager Jeff] Weaver said. "We hope Donald Trump has the courage to get on stage now that he said he would."


Gotta know when to hold, know when to fold 'em, know when to walk away; and in this case, Sanders should just run.  Especially because Bernie would come out of this as their man on our side.  I mean, if he wants to burn whatever bridges he has left in the Senate, and become completely useless to Vermont.....