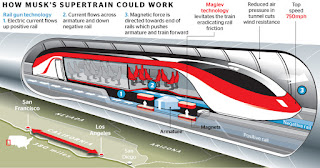 I don't think we can build enough of these fast enough....

I like playing around with numbers.  Josh Marshall raises a pertinent point about the Trump love-in currently going on among the GOP on Capitol Hill:  what about the promise to deport all the "illegal aliens" within 18 months?

There are numerous problems with, legally as well as morally.  But let's consider logistics a minute:  how do you arrest, detain, and deport 11 million people with 18 months?

Remember when Hurricane Rita followed on the heels (so to speak) of Hurricane Katrina, and people along the upper Texas coast panicked and all decided to drive to Dallas?  And the 250 miles or so stretch of freeway was bumper to bumper the whole way?  That was probably a few hundred thousand people (well, figure fifty-two cars per mile, more or less, with at least two people per car, you still only reach about a quarter of a million.)

So what transportation system do you use to move 11 million people?  Interstate freeways?  Passenger rail?  Jets? Busses?  Lines of trucks filled with people?   Look at the refugees fleeing Syria.  Amnesty International in February of this year reported over 4.5 million refugees had fled to 5 countries.  Now double that number, and add half again, and move them in 18 months.  I know you know it can't be done, but think about it for a minute.

Then think about how many people would be needed to round up 11 million people, man the facilities where they are housed, operate the transport system, and man the departure points.  Because I said I love numbers, I looked up the number of prisoners in all jails in the U.S.  As of 2014, it was just under 3 million.  The number of people employed in corrections at all levels of government, is just over 1 million.  So if you ramp up the number of detainees to 11 million (and where do the facilities comes from to house them until they can be physically deported), you'd need at least 4 million more employees just to handle detention and, let's be generous, transportation (I don't know how many employees in "corrections" are actually guards, I suspect no small number of them are administrative personnel).  And that guesstimate doesn't even take into account the number of people you would need to round up 11 million people and get them to those facilities.

And what cooperation can be expected from the countries taking these people?  Do we just dump them out like so much refuse at a landfill, and let the receiving countries worry about the logistics on their end?  Again, Europe dealing with the Syrian refugees is an object lesson in mass migration.

The idea is as ludicrous as a child's idea fantasy, as realistic as believing Santa Claus brings all those Christmas presents.  It's completely indefensible.  It makes as much sense as declaring the moon is made of green cheese, and we will outfit a mining operation to solve our green cheese shortage.

And yet, as Josh says, Trump hasn't retracted it, and nobody in the GOP is talking about it.
Posted by Rmj at 8:00 AM