Giordano Bruno's problem was he annoyed everybody 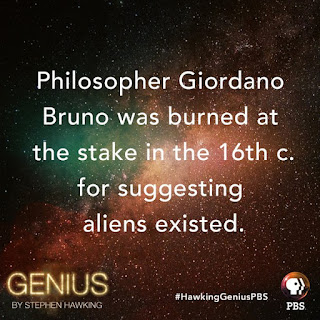 Just to pick up with that poster, which I was rather surprised to find on-line:  it's a perfect example of how science wants to re-contextualise religion in order to make science both its replacement and its superior.

Because this is what happened to Giordano Bruno:

At the age of eleven he went to Naples, to study "humanity, logic, and dialectic", and, four years later, he entered the Order of St. Dominic, giving up his worldly name of Filippo and taking that of Giordano. He made his novitiate at Naples and continued to study there. In 1572 he was ordained priest.

It seems, however, that, even as a novice, he attracted attention by the originality of his views and by his outspoken criticism of accepted theological doctrines. After his ordination things reached such a pass that, in 1576, formal accusation of heresy was brought against him. Thereupon he went to Rome, but, apparently, did not mend his manner of speaking of the mysteries of faith; for the accusations were renewed against him at the convent of the Minerva. Within a few months of his arrival he fled the city and cast off all allegiance to his order.

Bruno was not a guy who got along with people:

From this point on, his life-story is the tale of his wanderings from one country to another and of his failure to find peace anywhere. He tarried awhile in several Italian cities, and in 1579 went to Geneva, where he seems to have adopted the Calvinist faith, although afterwards, before the ecclesiastical tribunal at Venice, he steadfastly denied that he had ever joined the Reformed Church. This much at least is certain; he was excommunicated by the Calvinist Council on account of his disrespectful attitude towards the heads of that Church and was obliged to leave the city. Thence he went to Toulouse, Lyons, and (in 1581) to Paris.
....
In 1583 he crossed over to England, and, for a time at least, enjoyed the favour of Queen Elizabeth and the friendship of Sir Philip Sidney. To the latter he dedicated the most bitter of his attacks on the Catholic Church, "Il spaccio della bestia trionfante", "The Expulsion of the Triumphant Beast", published in 1584. He visited Oxford, and, on being refused the privilege of lecturing there, he published (1584) his "Cena delle ceneri", or "Ash-Wednesday Supper", in which he attacked the Oxford professors, saying that they knew more about beer than about Greek. In 1585 he returned to France, and during the year which he spent in Paris at this time made several attempts to become reconciled to the Catholic Church, all of which failed because of his refusal to accept the condition imposed, namely, that he should return to his order.

He went to Germany in 1587 but was excommunicated by the Lutherans (!).  He was finally extradited from Venice to Rome to stand trial before the Roman Inquisition:

In the spring of 1599, the trial was begun before a commission of the Roman Inquisition, and, after the accused had been granted several terms of respite in which to retract his errors, he was finally condemned (January, 1600), handed over to the secular power (8 February), and burned at the stake in the Campo dei Fiori in Rome (17 February). Bruno was not condemned for his defence of the Copernican system of astronomy, nor for his doctrine of the plurality of inhabited worlds, but for his theological errors, among which were the following: that Christ was not God but merely an unusually skilful magician, that the Holy Ghost is the soul of the world, that the Devil will be saved, etc.

A modern day philosopher, or a thinker of any note, he was not:

Thus, his system of thought is an incoherent materialistic pantheism. God and the world are one; matter and spirit, body and soul, are two phases of the same substance; the universe is infinite; beyond the visible world there is an infinity of other worlds, each of which is inhabited; this terrestrial globe has a soul; in fact, each and every part of it, mineral as well as plant and animal, is animated; all matter is made up of the same elements (no distinction between terrestrial and celestial matter); all souls are akin (transmigration is, therefore, not impossible). This unitary point of view is Bruno's justification of "natural magic." No doubt, the attempt to establish a scientific continuity among all the phenomena of nature is an important manifestation of the modern spirit, and interesting, especially on account of its appearance at the moment when the medieval point of view was being abandoned. And one can readily understand how Bruno's effort to establish a unitary concept of nature commanded the admiration of such men as Spinoza, Jacobi, and Hegel. On the other hand, the exaggerations, the limitations, and the positive errors of his scientific system; his intolerance of even those who were working for the reforms to which he was devoted; the false analogies, fantastic allegories, and sophistical reasonings into which his emotional fervour often betrayed him have justified, in the eyes of many, Bayle's characterization of him as "the knight-errant of philosophy." His attitude of mind towards religious truth was that of a rationalist. Personally, he failed to feel any of the vital significance of Christianity as a religious system. It was not a Roman Inquisitor, but a Protestant divine, who said of him that he was "a man of great capacity, with infinite knowledge, but not a trace of religion."

But it makes a more convenient story for "science" to make him a martyr of medieval religious dogma and anti-empirical ignorance; even if it isn't a fact, at all.

An no, Galileo wasn't imprisoned for promoting the Copernican system.  A brief quote from the long article at New Advent tells the true tale of that:

Nevertheless it was a churchman, Nicholas Copernicus, who first advanced the contrary doctrine that the sun and not the earth is the centre of our system, round which our planet revolves, rotating on its own axis. His great work, "De Revolutionibus orbium coelestium", was published at the earnest solicitation of two distinguished churchmen, Cardinal Schömberg and Tiedemann Giese, Bishop of Culm. It was dedicated by permission to Pope Paul III in order, as Copernicus explained, that it might be thus protected from the attacks which it was sure to encounter on the part of the "mathematicians" (i.e. philosophers) for its apparent contradiction of the evidence of our senses, and even of common sense. He added that he made no account of objections which might be brought by ignorant wiseacres on Scriptural grounds. Indeed, for nearly three quarters of a century no such difficulties were raised on the Catholic side, although Luther and Melanchthon condemned the work of Copernicus in unmeasured terms.

I would note the objections from the Protestants Luther and Melanchthon.  Most of the stories of the perfidious Catholic church fighting to dispel the light of science come from Protestant cultures, where there is still no love lost for Catholicism.  Which means a lot of the popular history of the Middle Ages turning into the Renaissance is filtered through some very cloudy lenses.

And a lot of nonsense is still taken as fact; when, in fact, it has its roots in Protestant anti-Papist sentiments.
Posted by Rmj at 6:54 AM