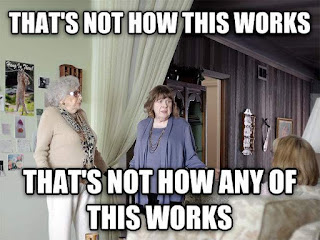 Speaking of not knowing how things work:


Now, the problem with this advice is:  Donald Trump hasn't won the GOP nomination yet.  Yes, he's the "presumptive" nominee; but he doesn't have the delegates he needs to clinch the nomination at the convention (which still counts, even if it is largely a 3 day photo op).  And yeah, he later walked it back with a Tweet; but is this how he will conduct international diplomacy?  Say one stupid thing, then correct it on Twitter later?

On CNBC this morning Trump suggested that one strategy he'll use for reducing the national debt is having bond holders accept "haircuts". To be clear what that means, he'll try to get people who own US Treasury bonds and are owed X to accept X/2, or some reduced amount of what they are owed.


As JMM goes on to point out:

To be clear, this will never happen. But the fact that Trump is proposing it shows that when it comes to macro-economics and global economics Trump is a huge ignoramus who shouldn't be allowed anywhere near the US Treasury. It's an amazing suggestion. Not just stupid but something suggested by someone who simply knows nothing about how the economy works.

This is the guy some Bernie supporters think we should elect, if only by default, in order to teach the country a lesson about not voting for Bernie.  I don't know why they don't just go all the way and support Trump.  He seems like their kind of guy.

And to catch up with yesterday:

"She's been the total enabler. She would go after these women and destroy their lives," Trump said, according to NBC News. "She was an unbelievably nasty, mean enabler, and what she did to a lot of those women is disgraceful."

Trump told the crowd that "nobody respects women more than me" before adding that "nobody in this country, and maybe in the history of the country politically, was worse than Bill Clinton with women."

"Have you ever read what Hillary Clinton did to the women that Bill Clinton had affairs with? And they're going after me with women?" he asked the crowd, according to NBC News.

I know there is some concern that the Democrats will "blow this" (isn't there always?).  But I'm not sure the Dems need to do much more than reinforce the impression that Trump is a loudmouthed boor; and otherwise, stand aside.

Never interfere with a man busy punching himself in the face.