A film by Ken Burns* 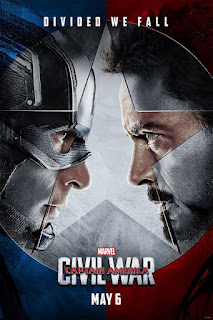 So I saw the movie (about which more later), and in addition to my usual "What movie did those reviewers watch?" reaction (again; more later), I drove home listening to this story on NPR.

Which made me think:  the other side of movies like this is that they are still movies.  The superheros never have bad intelligence, and the only surprises are the ones the bad guys spring which cause the good guys to inadvertently hurt people (again, more later.  I know, I know!).  So it's never the good guys actually being bad guys because they raid a house that didn't have drugs, or where the kids are scared because the SWAT team is dressed like something from a FPS video game.

At worst the good guys are just misguided, or misunderstood, which is certainly the subtext of "Civil War."  Most of the collateral damage of "The Avengers" was due to an alien space invasion prompted by a Norse God with delusions of grandeur and a bad childhood.  But it still shows up in "Civil War" as a reason to rein in the good guys.  True, the next Avengers' movie featured a villain created by Tony Stark (be careful what you wish for!), but Tony doesn't take the blame for that one (!), and instead agrees the good guys need to be locked up somewhere if they don't play ball (Tony, of course, plays ball.  Good corporate elitists always do!).  And the damage in "Winter Soldier" was because the super-secret agency set up to protect us all went rogue (wait, wasn't that the plot of "Age of Ultron"?  Hmmmmm.....), and fell in spectacular (and destructive) fashion.

So does it matter if they mean well?  The sheriff on NPR seemed to think so, although she put the blame for bad PR on inadvertent violence and poor leadership and discipline.  (Jawohl!)  But do good intentions count for something?  Or is failure not an option, but standard equipment?  And what does "failure" mean?

That's also a question the movie raises.  But it does it in the usual good guy/bad guy terms:  the former mean well even if shit happens, the latter mean only to make shit happen.  Is it always that simple?

*I saw it at the Alamo Draft House.  If you were there, you'd get the joke.  Sorry, it's a weakness.