In Memory of Daniel Berrigan 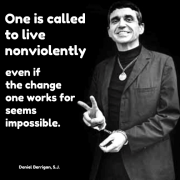 You were silly like us; your gift survived it all:
The parish of rich women, physical decay,
Yourself. Mad Ireland hurt you into poetry.
Now Ireland has her madness and her weather still,
For poetry makes nothing happen: it survives
In the valley of its making where executives
Would never want to tamper, flows on south
From ranches of isolation and the busy griefs,
Raw towns that we believe and die in; it survives,
A way of happening, a mouth.

It's taken me decades to accept the truth of Auden's words.  I don't think Fr. Berrigan ever got there.  During his trial, he said:

The only message I have to the world is: We are not allowed to kill innocent people. We are not allowed to be complicit in murder. We are not allowed to be silent while preparations for mass murder proceed in our name, with our money, secretly...It’s terrible for me to live in a time where I have nothing to say to human beings except, “Stop killing.” There are other beautiful things that I would love to be saying to people. There are other projects I could be very helpful at. And I can’t do them. I cannot. Because everything is endangered. Everything is up for grabs. Ours is a kind of primitive situation, even though we would call ourselves sophisticated. Our plight is very primitive from a Christian point of view. We are back where we started. Thou shalt not kill; we are not allowed to kill. Everything today comes down to that — everything.

The act was pitiful, a tiny flare amid the consuming fires of war. But Catonsville was like a firebreak, a small fire lit, to contain and conquer a greater. The time, the place, were weirdly right. They spoke for passion, symbol, reprisal. Catonsville seemed to light up the dark places of the heart, where courage and risk and hope were awaiting a signal, a dawn. For the remainder of our lives, the fires would burn and burn, in hearts and minds, in draft boards, in prisons and courts. A new fire, new as a Pentecost, flared up in eyes deadened and hopeless, the noble powers of soul given over to the “powers of the upper air.” “Nothing can be done!” How often we had heard that gasp: the last of the human, of soul, of freedom. Indeed, something could be done, and was. And would be.

Rather like the crucifixion of a man from Nazareth, though I don't know if Berrigan ever made the connection.  Oddly, if it wasn't for Constantine, that man's death might have been erased by history by now, and all he taught might have been forgotten.  As it is, it is more often honored in the breach than in the keeping.  But it survives, in the valley of its making; a way of happening, a mouth.

That really is all it ever could do.