What if they gave a revolution and nobody came? 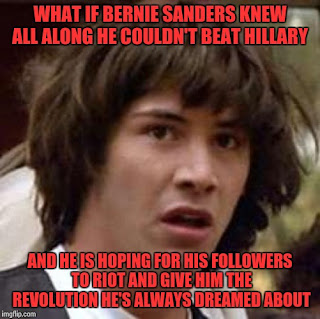 So we are told on the one hand that "Millenials" (no, I really don't like generational groupings; might as well say "Virgos" or "Sagittarians" or "those born in the year of the Monkey") have more "nones" in them than ever before (bollocks).  On the other hand, there is hopeful speculation that Bernie Sanders has done what Occupy Wall Street could not, and actually started a revolutionary political movement, maybe even a return (or just resurgence) of the "secular sacred."

No, probably not; for a very simple reason that I'm not surprised would escape a UCC pastor (like the Rev. Laarman; or your humble correspondent.  No fingers being pointed here.).  The 19th century movements cited by Rev. Laarman were not movements promoted by a figurehead who rallied people to a cause (John Brown is a fine example of the failure of such singular efforts).  They were movements of the people, and we don't really associate any one figure with them.  Abraham Lincoln gets credit for freeing the slaves, but we know the abolitionist movement started in the churches almost as soon as the Constitution was ratified, and the backbone of the abolitionist movement was in the religious sacred, not the secular sacred.

The same was true of the civil rights movement:  the hard and public backbone of that movement was not the power of the personality of Dr. Martin Luther King; it was the support of the churches behind the Southern Christian Leadership Conference.

Occupy Wall Street fizzled because it was a bunch of angry people who were mad as hell and who weren't going to take it anymore.  If you recall, that got Howard Beale his own TV show, a freak show that ended with his murder on air.  It didn't prompt a revolution, and it didn't change a damned thing.

Neither did Occupy Wall Street.  It had no roots; it had nothing to hold it in the ground.  It dried up, it blew away; almost literally, not unlike the revolutionary movements of the '70's mocked in "Network."s

Whither Bernie's "revolution"?  I think Trump threw the final shovel of dirt on that coffin yesterday, when he appropriated the language of the Sanders campaign even as he put his foot in Bernie's face (metaphorically) and shoved him down the slide at the Santa display in "A Christmas Story."  Bernie wanted, not a Red Rydger BB gun, but one more chance for free air time; and Trump basically told him "You'll shoot your eye out, kid," then planted a boot in his upturned face, and pushed.

Trump established himself as the man who gives and the man who takes away, and he rendered Sanders a helpless child who has been discarded as the store is closing.  The "secular sacred"?  Even that requires roots in a desire to effect real change in the world.  The Sanders campaign is down to squabbling about process and vote counts and the openness or closed-ness of primaries, and who super delegates should pledge their fealty to, and why.  Sanders is down to people like this:

“A dark side of me wants to see what happens if Trump is in,” said Mr. Vizcarra, who works in information technology. “There is going to be some kind of change, and even if it’s like a Nazi-type change. People are so drama-filled. They want to see stuff like that happen. It’s like reality TV. You don’t want to just see everybody be happy with each other. You want to see someone fighting somebody.”


That's neither revolutionary, nor sacred, nor even profoundly secular; it's just pathetic.  A presidential campaign is not reality; it's just reality TV.  The difference between a Trump supporter and a Sanders supporter is absolutely erased at that point.  And what revolution is Trump bringing?

When Bernie is forced to stand down, his "movement" will not live after him.  Even Ross Perot's third party struggled without their candidate; but no one was surprised when it disappeared without effect.  If Sanders were a MLK like figure, he'd have been asked to lead a movement already burgeoning from the ground up, and he might have spent a decade or so doing it.  But he's a flash in the pan who inspired college age voters with promises of free tuition and a 4 page plan to "fix" the banks too big to fail.  It was a vision too small to cope with reality, and in the end, that's what any revolutionary movement has to do:  cope with reality.  The abolitionists struggled for 4 score and 7 years, or more; the civil rights movement struggled from the end of World War II into the 1970's, and the struggle goes on.  Bernie promises a revolution which will accomplish its goals within a few years, if only the "corrupt" system and the evil "Establishment" can be defeated like villains in a  comic book.

There is everything secular about that, but nothing profound, nothing with lasting purpose or breadth of vision.  It's just the last desperate attempt of a man who's never accomplished what he set out to accomplish, trying one more time before it's too late to put a lifetime's effort into one last push.

Sadly, this is real life; not the final episode of a TV series.