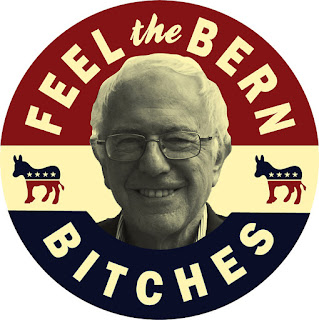 H.A Goodman has made a minor cottage industry (google the name and Salon, I'm not going to try to link to it) out of insisting the FBI will indict Hillary Clinton (ignoring the fact indictments must come from a grand jury empaneled by a prosecuting attorney) for her e-mail server, and that "scandal" will ruin her bid for the White House.

Apparently Bernie Sanders has decided that is his "Hail Mary" to win the Democratic nomination:

Advisers to Mr. Sanders said on Wednesday that he was newly resolved to remain in the race, seeing an aggressive campaign as his only chance to pressure Democrats into making fundamental changes to how presidential primaries and debates are held in the future. They said he also held out hope of capitalizing on any late stumbles by Mrs. Clinton or any damage to her candidacy, whether by scandal or by the presumptive Republican nominee, Donald J. Trump.


And all that talk about rigged primaries and undemocratic processes is not coming from a fringe of crazy Sanders supporters anonymously posting on internet sites:

For weeks, some current and former Sanders campaign workers have privately acknowledged feeling disheartened about Mr. Weaver’s determination to go after the Democratic National Committee, fearing a pitched battle with the party they hope to support in the general election. The intraparty fighting has affected morale, they say, and raised concerns that Mr. Weaver, a longtime Sanders aide who more recently ran a comic book store, was not devoted to achieving Democratic unity. Several described the campaign’s message as having devolved into a near-obsession with perceived conspiracies on the part of Mrs. Clinton’s allies.

Conspiracy theories are a poor basis for a campaign, and don't do much more to inspire confidence in the offered leadership.

ADDING:  And if you can't feel the Bern, mock the Bern!