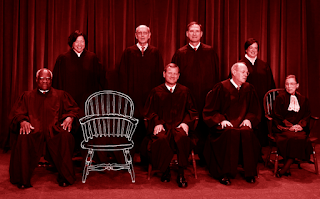 it's unable to lunch today, Madame.

It also regrets Sebelius v. Hobby Lobby.  Oh, BOY!, does it regret that one!  Because Zubrik has turned into the very reason the Courts are not supposed to do legislative duties:

The conservative male justices suggested women could receive the coverage from contraceptive-only plans -- plans which don't currently exist and which the government, health policy wonks and even some of the women justices on the bench all decried as not feasible. Some of the court’s conservatives also scoffed at the idea the the coverage needed to be “seamless.” In their post-hearing supplemental briefing, the challengers said they would only settle for a compromise where women would have to engage in a separate contract with their insurer, or receive coverage from some outside plan or government-funded program.

Justice Sonia Sotomayor, in a concurring opinion Monday joined by Justice Ruth Bader Ginsburg, said that any compromise that amounted to a contraceptive-only plan would leave women “in limbo.”

“And requiring that women affirmatively opt into such coverage would ‘impose precisely the kind of barrier to the delivery of preventive services that Congress sought to eliminate,” she wrote.

This is why Congress has hearings, and gathers evidence, and seeks compromise, and ends up making sausage:  because that's the only way laws get made.   Otherwise you end up with a handful of people making stupid comments about contraceptive-only plans which exist only in their imaginations.

And why is the Court engaging in this nonsense, or rather, trying now to refuse to?  Because they decided it was up to them to show sensitivity to religious beliefs when no one else in government would, and now they've opened Pandora's Box, and every objection to any application of law can become a theological issue that the Scholastics wouldn't want to argue about, but which the Supremes must adjudicate.

And they would prefer not to.

Call it the Bartleby theory of jurisprudence:  create the situation and then when it comes back to bite you on the ass, take cover in absolute passivity.  Yeah, that'll work!
Posted by Rmj at 3:00 PM