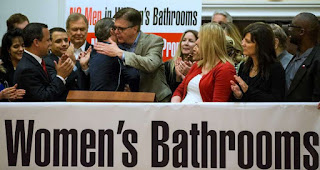 Our text for today comes from the Texas Tribune, in an article that is a model of good journalism.  Herein we learn that:

Two other school board trustees said Tuesday they were surprised the issue had escalated like it had, noting Scribner had been discussing it with them for months and that it stemmed from a non-discrimination policy updated in 2011.

That policy was updated again in 2012 to add protections against gender-based harassment, Scribner told meeting attendees Tuesday before the board took public comment.

“This policy is nothing new,” he said, reiterating his support for the rules. “I am proud of the guidelines that we’ve developed and I’m proud that we’re able to support this policy to provide our educators with a framework to make all students — all students, whether they are transgender or not … comfortable and confident in the learning environment.”

As has been my experience with school boards and school districts, the emphasis is on the children, not on the parents.  There are parents complaining about this rule being implemented without public input; but that's not how the system works.  Parents don't get to micromanage every detail of district policy:

[School district superintendent Kent] Scribner announced the now-controversial bathroom policy at the school board’s April 19 meeting, where there was no related discussion, according to a Fort Worth Star-Telegram report. The board was not asked to vote on the policy because it is an “administrative guideline,” which is a policy that superintendents can implement without official board approval.

So there is not only no valid path for the public to demand input before this policy is implemented, there is no valid reason for the Lite Guv to demand Scribner's resignation.  Let me explain.

Under the Texas Constitution, most of the government officials in Texas are directly elected.  This means the Lt. Governor, the presiding officer of the Texas Senate, is elected directly by the people, not by the Senators.  The Attorney General is directly elected (which is why an indicted A.G. facing a federal fraud suit can't be forced to resign).  The list goes on and on, but none of these elected officials has the authority to force the resignation of any of these other elected officials.

Now we come to Texas school districts.  They are "independent school districts (ISD's), created by legislation (enacting the Constitutional provision for them) and then left to run the schools in accordance with state law.  The voters living in that school district pay school taxes set by the ISD Board, members of whom are elected by the voters living in that ISD.  The role of the Board is oversight (compliance with state law, basically), set policy for the district, and hire the Superintendent, the chief administrative office of the district.   As elected officials, the Board answers only to state law and the voters.  They do not answer to the Lite Guv., the Guv., the AG, the Land Commissioner, or any other elected state official.  The Superintendent answers to the Board that hired her/him.

Dan Patrick lives in Houston.  He doesn't pay taxes in  Forth Worth ISD, vote there, or have anything to say about the policies set by that ISD.  He's an ass, to boot.

And so we return to our text:

“I have strong concern that this policy violates provisions in the Texas Education Code that give parents an unequivocal right to information regarding their children and is motivated by a misguided view of federal law,” Paxton told Ramos in a letter. “I sincerely hope you will assess these deficiencies in the transgender policy and more as the board deliberates.”

That is what lawyers call "bafflegab."  It isn't a legal opinion, and all it does is point to some vague requirement that parents be informed about their children's education.  Well, this policy has been in place for five years, and is available on the district's website.  As for the "misguided view of federal law," that's a shot at Loretta Lynch.  And frankly, coming from a guy being sued by the federal government for violating federal law, it's a bit rich.  Too rich.  Patrick said, at his press conference, that FWISD is violating state law.  He hasn't, so far as I know, specified what that law is.  (I have since heard his words, and he cited the "Texas Education Code."  So he's taking his legal analysis from Paxton's.  Patrick is not a lower, he's actually a former radio talk show host.)  He is advocating a law similar to North Carolina's; but you can't violate a law that isn't on the books yet; so I still don't know what he's talking about.  Nor is Patrick winning friends in the major metropolitan school districts of Texas:

El Paso Superintendent Juan Cabrera said he began exploring the possibility of adopting such a policy last summer, when he directed school district lawyers to study current guidelines. For now, he said the district follows certain local and federal guidelines that say schools should accommodate the bathroom needs of transgender students however possible.

“We’re a very progressive city and progressive school district and we want to afford all of our children every right and accommodation that they deserve,” he said.

Asked if he would seek board approval for such a policy, Cabrera said it depends.

If it’s a matter of student safety, “I absolutely have the right to implement administrative regulations to make sure they all feel safe,” he said. “I’m not going to subject myself to political will if I think safety of the children” is at stake.


You will notice that "safety" is the linchpin issue here, and the safety of transgendered students is important as the safety of all students.  The position of the DOE and the DOJ has been fairly clear on this issue, and Patrick and Paxton lose that argument very quickly.  Which may be why Patrick will end up doing no more than holding angry press conferences.  He may be able to get a "bathroom bill" through the Texas Senate in 2017; but the Speaker of the House, who is more pragmatic, may well kill the idea until it is clear the Federal courts won't cost Texas a lot of wasted money trying to defend the indefensible.

I would be remiss if I didn't include this lengthy quote recounting the counter-press conference to Patrick's in Fort Worth:

In a pre-emptive press conference held before Patrick spoke, supporters of the district's transgender bathroom policy also lobbed accusations of misplaced priorities, accusing Patrick of making something out of nothing. They derided Patrick for what they described as his “fake outrage,” calling him a shameless bully."This policy does nothing to improve a student's chances of graduating," he said.

“There is no news here,” said Steve Rudner, chairman of Equality Texas. “The only news here is that the lieutenant governor has decided to pick on an already bullied group of kids. It’s shameful and it’s despicable."

The dueling news conferences were held in advance of a school board meeting where the new guidelines were not on the agenda but were addressed during a packed and rowdy hourlong public comment period. Supporters of the new guidelines thanked Scribner and the board for protecting transgender students while opponents expressed outrage that the board did not take public comment on them. They also called on Scribner or the board to repeal the guidelines and start over, with some echoing Patrick's call for the superintendent to step down.

“I don’t understand why these rules were implemented behind closed doors without a vote from the board,” said Nicole Hudgens, a policy analyst with the conservative group Texas Values. “Why is there an attempt to break up the family here? Because that is what you’re doing.”

Dallas resident Paula Ellis, a 53-year-old transgender woman, meanwhile, told the board she avoided using the bathroom while in school, describing it as “painful and difficult.”

“Thank you for your efforts to ensure that all of our kids are safe,” Rev. David Winn said, urging opponents to “remember that Jesus spent the majority of his time with outcasts.”