It's a wonder tall trees aren't layin' down.... 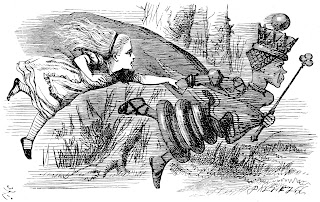 Amanda Marcotte points out that Bernie Sanders hung his 'revolution' on Thomas Frank's analysis that Kansas doesn't see the Democrats talking about economic issues that matter to Kansas.  (Frank's analysis, of course, having been obliterated by Kansas in the past four years, but Bernie's from Vermont.)  Marcotte attributes this to racial animus which is more powerful than economic worries, and which in fact colors how one sees economic issues.  Well, maybe, sez I.  But maybe it's just because people are fundamentally "conservative," and not in the political left/right sense.  They are more like Frost's neighbor mending the wall, who Frost imagines as a savage grasping boulders in a dim twilight of ignorance, but who comforts himself with his familiar phrase:  "Good fences make good neighbors."

Call it the "we've always done it this way" syndrome.

I live in a state where "no fault" auto insurance has been the law of the land for at least 3 decades (more or less; I'm too lazy to look up the actual date that started).  And yet a few years ago I was involved in a collision, and the other driver called his lawyer, who proceeded to tell me I couldn't move my car out of traffic because the police needed to see it to make a report and assess responsibility.

We've always done it this way.  Even when we haven't done it that way for nearly 3 decades (that lawyer was too young to remember when we ever did it "that way" but it didn't matter:  she knew we'd always done it anyway.)

Texas has had a "Robin Hood" system of school finance for almost as long.  It's been in the news since the Edgewood case forced the Texas Supreme Court to force the Legislature to rewrite the state school financing law in 1993.  Texas doesn't have a state income tax, and can't have a state property tax, so the solution was to take local property tax revenues from local independent school districts (almost every level of government in Texas is in some ways independent of every other level of state government) and redistribute it to poorer school districts.  (Texas is very proud of keeping the state close to the people in this way.)  This has been the way Texas finances i's schools since that year.  It has been in the news repeatedly, as recently as this year, when the Texas Supreme Court finally had to decide if the current plan was constitutional.

And so people in Texas don't understand why their local schools continue to cut programs, lay off teachers, and shrink in general, even as the state imposes new and more significant burdens with requirements like standardized test and longer school years, and even as property values (and their taxes) rise.  The way the formula is written, the more valuable the property in your district, the more money you have to give up.

Hence:  "Robin Hood."  Everybody has heard of the "Robin Hood" law; aside from school administrators and school boards, almost no one seems to understand what it does.

We've always done it this way.  Even though we stopped doing it that way almost 25 years and two Texas Supreme Court cases ago.

I know democracy is supposed to function because of an educated public with access to a free press.  I find that rather it stumbles along, mostly on inertia, in the face of a public ignorant of the most basic functions of law (you cannot violate a law that doesn't carry a criminal prohibition or provide for criminal punishment, and that only when the conduct proscribed is clearly laid out in the statute; and yet how many people expect Hillary Clinton to be indicted because she "broke" the rules (and aren't rules law?) of the Department of State?) and the most widely discussed changes in law?

57 channels of news and nothing on.  Then again, you can lead that horse to water; but you can't make him think.  Or learn anything.