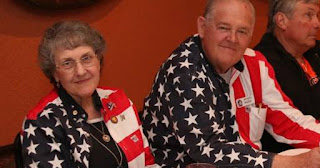 In hindsight, a Texas flag shirt might have been a better choice....

There is, even in East Texas (which is culturally western Louisiana) an embarrassment factor, as well as a competency factor.  On a statewide scale, one reason Rick Perry didn't run again for governor was "Oops!".  We really don't like politicians who embarrass us on the national stage.  And reaching back to the pre-social media age, there was Clayton Williams' famous refusal to shake Ann Richards' hand at a debate.  He was pretty much done after that.

It's the little things that count.

So while Mary Lou Bruner's Facebook posts about Barack Obama didn't keep her from getting into a runoff, when she was one of two candidates, instead of one of several, it began to be embarrassing:

"It would appear that a perfect storm occurred to defeat Bruner," Jones said in an email Tuesday night. "Superintendents and teachers (and their friends and families) across the district rallied against her due to disagreement with her positions on education policy, the belief she would not be a good representative of the district’s interests, and the embarrassment they felt her election would bring to the region."


TPM noted before the runoff election that:

The only crack that has formed in Bruner's stronghold on the race is a recent meeting with a group of East Texas superintendents that went off the rails. During her speech to the superintendents, Bruner cited incorrect statistics, drawing protests from the audience.

When she claimed that close to half of the students in the state were enrolled in special education programs, people in the audience told her that was incorrect, according to video posted by Texas television station KLTV. Bruner then asked, "Is that wrong?" before telling the superintendents that she would like to be informed.

And when Bruner claimed that she met with the superintendent of the Mineola school district, that superintendent stood up and told the crowd that the two had not in fact had a meeting.

The meeting lost Bruner the endorsement of a Tea Party group in Texas, Grassroots America, We the People, last week. The group said they asked Bruner to correct the statistics she used at the meeting with East Texas superintendents, and then they withdrew their endorsement when she did not issue a statement.

"We are all disappointed to have to take the strong measure of withdrawing our endorsement for a candidate," the group's executive director, JoAnn Fleming, said in a statement. "Since the institution of this organization in 2009, we have never had to take such an action however, this organization requires accountability and personal responsibility from the candidates it endorses. We have always made that abundantly clear."

Bruner apologized for the remarks she made at the meeting with superindetendents in an interview that aired Sunday on Dallas television station WFAA. She said that she meant to refer to students in special programs, not special education, and asked for Grassroots America to reconsider its endorsement.

It would seem even the Tea Party groups are starting to expect some minimal competency in their candidates.

How did she get that far?  Last person standing in a crowded race where nobody really knew who the candidates were (how many people go into the voting booth determined to elect someone to the Texas Board of Education?).  In the runoff they found out, and they voted for their children, not for their ideology.  Is this a lesson for the nation?  Is Kevin Ellis the best choice for the position?  No, probably not, to both questions.

But it does prove the system works; at least sometimes.

And in other news (just to save another post), Elizabeth Warren said this:

What kind of man does that? I will tell you exactly the kind of man. It is a man that cares about no one but himself.

What kind of a man does that? A man that will never be the president of the United States.

NPR played a clip (in headlines, which are not on-line, and I can't find a news story on it yet) where Trump replied he was a businessman, he was supposed to make money in real estate.  Which isn't exactly a thunderous riposte.

And note this CBS story on the Trump/Warren battle, which includes information about Trump's lies regarding his charitable donations to veterans.  That is not only not going away, it's growing legs.

This could almost start to be fun, soon.
Posted by Rmj at 9:16 AM