It's burning down in Texas 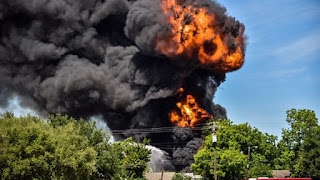 This is actually in my neighborhood.  The school that was affected has been evacuated, and it's only a few blocks from the church I used to serve.  I saw the smoke earlier this morning (about 10:30) and would have pegged for being much further from the school than it was.

Then again, the plume of smoke hung over the area like Sauron slowly dissipating from Barad-dur.  Sorry, but that's the image it brought to mind.  Fire is a particularly hellish presence on earth. 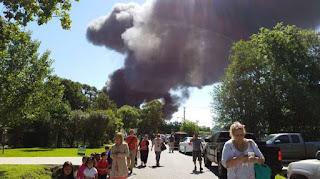 Now the question is:  what the hell were these materials doing being stored in such a heavily residential area?

I should be surprised, but I'm not.  When I lived in a parsonage, a fire broke out across the creek from us, on the back side of the cemetery.  It was a facility which had an illegal LP gas tank for fueling fleet cars and trucks for the company located there.  Had the tanks been caught up in the blaze, they could have exploded, taking a city block or so with them.  (This article tells me the fire is very close to the church/parsonage, because the cleaning company is the one that had the illegal LP tanks.) 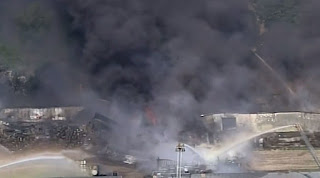